Posted on November 23, 2013 by Christie Stratos

By now, you’re probably familiar with Donna Hatch’s historical romance novels. If not, check out her Amazon page for a listing of her published books.

I love many things about historical fiction—both as a reader and as an author. When life gets stressful, the first thing many readers do is pick up a novel. Historical novels provide the perfect escape from reality. Total escapism can and does happen with modern-day novels, but the more a book differs from the present-day world with its present-day cares, the better an escape it provides. Historical novels transport readers to another place and time completely different from reality. Another draw of historical fiction for many people is that it typically has more lyrical writing  or “voice” than  other genres.

Like most Regency romance authors who pride themselves on historical accuracy, I extensively research British history, particularly the Regency Era, which is the early 1800’s.  This is how I create a virtual trip through time. Having my facts straight is not just a pretty backdrop for my stories; the manners and mores of society helped shape people who lived in that time, both those who embraced customs of the time and those who challenged them.

But if I had to pick one reason why I love historical romance, it’s the people. Call me a romantic, but people from the past seemed to be more concerned with honor. In Regency England, duty and honor meant everything. If a man said he’d do something, especially if he gave his word, he meant it, and others could count him to follow through, even at great personal cost.

I love the way people in Regency England spoke so eloquently. The upper classes didn’t maul the language—they used correct grammar and had an enormous vocabulary. They also prized wit and excelled in using the understatement. If you read books by authors of that day such as Jane Austen, you’ll see that their writing is almost poetic, each word chosen for its wording, imagery, and rhythm.

By the Georgian and Regency Eras, men and women alike were educated and could read, compute complex mathematics, speak multiple languages—French and Latin in particular—and loved philosophical debates. They were also very cultured. From a young age they were taught to dance, play music, sing, and recite poetry.

Men in many historical eras were civilized and treated women with courtesy by standing up when a lady entered the room, doffing their hats, curtailing their language, offering an arm, bowing, and a hundred other little things I wish men still did today. But they were also very athletic; they hunted, raced, fenced, boxed, rode horses. They were manly. Strong. Noble. Resolute. Honorable. I love that about them! And that makes them perfect heroes for both historical fiction and historical romance novels.

If you’re not familiar with Donna’s latest book, A Perfect Secret, make sure you check it out. 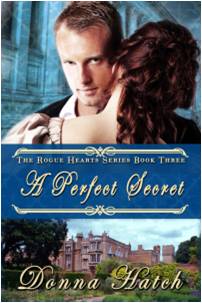 Desperate to protect her father from trial and death, Genevieve breaks off her engagement with Christian Amesbury and marries a blackmailer. After a year of marriage, she flees her husband’s violent domination only to have fate bring her back to Christian. Just when she thinks she’s started a new life of safety and solitude, her husband tracks her down, stalks her, and threatens everyone she loves.

Still brokenhearted over Genevieve’s betrayal a year ago, Christian can’t believe she’s come back into his life–and worse, that she’s done it on the anniversary of his brother’s death, a death that haunts him. Though tempted to throw her back into the river where he found her, he can’t leave her at the mercy of the terrifying man she married.

When her husband torments Genevieve and puts his family in danger, Christian will do anything to protect those he loves…anything except give Genevieve another chance to break his heart.

I’ve had a passion for writing since the age of eight when I wrote my first short story. During my sophomore year in high school, I wrote my first full-length novel, a science fiction romance. I wrote my second novel during my senior year, a fantasy romance. Needless to say, English and Creative Writing were always my favorite subjects. Yes, I’m a total grammar geek! In between caring for six children (7 counting my husband), I manage to carve out time to indulge in my writing obsession, with varying degrees of success, although I write most often late at night instead of sleeping. And yes, all of my heroes are patterned after my husband of 21 years, who continues to prove that there really is a happily ever after.