Our eleventh awesome author in the countdown until the Get Down With The Awethors Facebook event on April 12 is Joe Compton. He’s an indie author as well as president of his publishing company Never Mind The Fine Print LLC. Check out the story of how he came to start his own publishing company!

My book, Amongst The Killing, will be part of one of the bundled giveaways. I believe it will be in the thriller category. I also have a chat room on my website that I will be opening up for everyone on the 12th.

It’s called Amongst The Killing, a crime thriller available at Amazon.com on Kindle and in 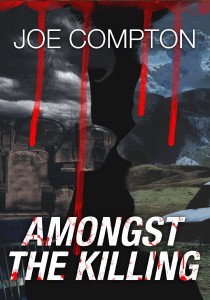 paperback here: http://www.amazon.com/dp/B00TYXGT36 and at Smashwords for all other ebook versions here: https://www.smashwords.com/books/view/521250.

I am fascinated and curious about human nature and the human condition. I always had this wild imagination, so I took the discipline I was taught and put it use in writing. It’s one of the few things I like to do that doesn’t seem like work, though anyone who knows me knows I put a lot into everything I do.

Short stories of Edgar Allen Poe. I read them a very young age and said I want to write like that. Of course I discovered it’s a lot harder than it looks, but the spirit of the way he wrote is very much a kindred spirit for me.

I will be there as much as I can. I will have specific “hot times” to be in the chat room event I am planning, but for the most part I will be in and out at various times during the day. 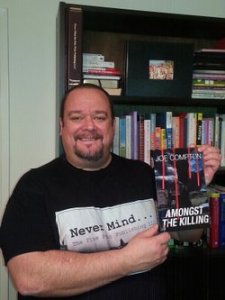 Writing has always been a passion. Published in his school anthology at an early age, Joe was able to get his first taste of self-publishing, having gotten to see firsthand what it took to publish and sell something on your own.

Right out of school Joe joined the Marines, and while serving his country, Joe wrote the first draft of Amongst The Killing. When Joe got out he began pursuing his writing dream in Denver. He got an agent and they actually got an offer from a publishing company. Alas, though, they wanted to groom this manuscript toward a movie of the week theme and were looking to change the entire concept. Joe didn’t want to go along with those plans and walked away.

Soured from his experience, Joe began pursuing a different writing avenue through screenplays and filmmaking, and they were as equally strong of a passion as novel writing. While still in Denver, Joe began making short films. He made three of his own, and though success would elude him in the traditional sense, he found another type of success. The relationships he forged and the avenues he opened up led him to realize he was not alone in his experiences, and thus he decided to build a publishing brand. A company that could help others like him be discovered. It took some time, but now Never Mind The Fine Print Publishing LLC is here. Their first effort is Joe’s book he wrote all those many years ago, Amongst The Killing.