BOOK RELEASE: Something in the Water by Ben Starling

Last year on Goodreads, we were lucky enough to meet the super personable and kind author Ben Starling, a guy who’s sure to make a splash in the indie author world. He has just published his second book in his Something series, Something in the Water, which is written from a woman’s perspective, and it involves a love story. We’ve only met one other man who has beautifully written something romantic from a woman’s perspective, so this is quite an accomplishment! He took the time to chat with us about everything from his connection to his characters to superhero talk and his next work.

First of all, tell us a little about yourself, Ben. How does your day begin?

I start my day with a brisk fifteen minute walk to a coffee shop! On the way, I think about the day ahead – what I am going to write about. I set my unconscious mind a number of writing-related tasks, have a coffee or herbal tea, read the paper and walk back supercharged to begin.

What do you do to relax?

I love doing intricate marine-themed art, using ink and pencil, which I find more satisfying and powerful than color—though I’m not sure I’d describe it as relaxation! The challenges of subject matter, light and dark and infusing each picture with a message is demanding…and very rewarding when it works out!

Can you tell us about your new release? 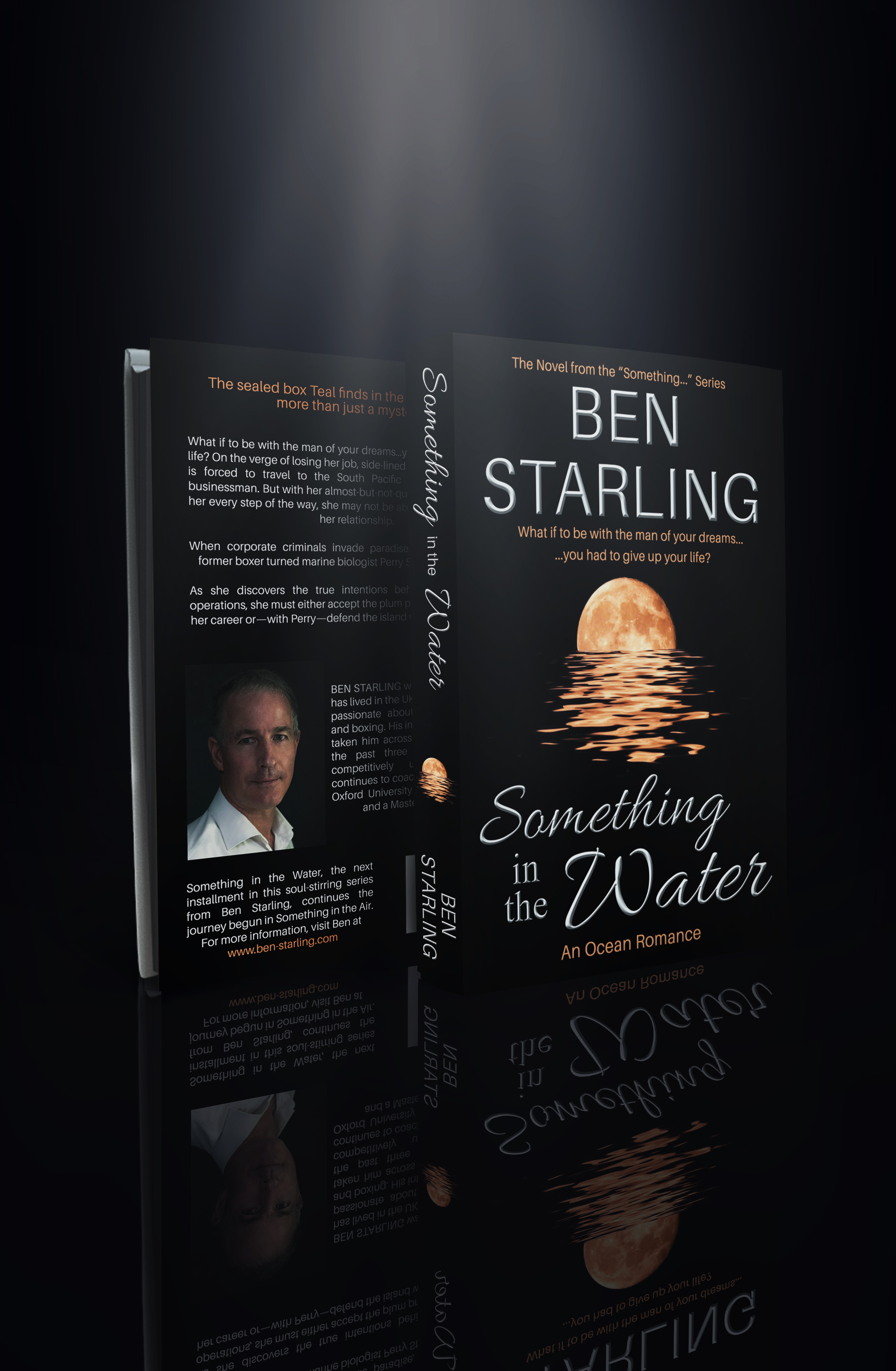 tropics thrown in too. Here’s the blurb:

What if to be with the man of your dreams…you had to give up your life? On the verge of losing her job, side-lined journalist Teal is forced to travel to the South Pacific to profile a powerful businessman. But with her almost-but-not-quite fiancé Bear discouraging her every step of the way, she may not be able to save her career or her relationship.

When corporate criminals invade paradise, Teal teams up with a former boxer turned marine-biologist to investigate. As she discovers the true intentions behind their new canning operations, she must either accept the plum promotion that will save her career or—with Perry—defend the island with more than her life.

Something in the Water, An Ocean Romance is available on Amazon. http://bit.ly/SITWbtour2am

Do you grow fond of your characters? Will you miss them?

For me, characterization is incredibly important. I fell in love with my heroine, Teal, and several beta-readers have reported falling in love with Perry, my “lead” man. Equally, some other characters have generated powerful reactions, including the utterly appalling Edward and the zany Emma. Oh, and there’s Violet, the blue footed booby (a comical sea bird) who seems to have attracted her own following…which isn’t limited to the avian community.

I would certainly miss these characters—but have managed to avoid this through the simple device of continuing to write about them! I will be highlighting several characters in future short stories in the “Something…” series.

What’s the most impressive thing you’ve seen in the ocean?

I’ve seen many awe-inspiring things, from whales and large sharks right down to amazingly beautiful little tropical fish and fabulously colourful marine worms. I have a great fondness for seahorses too…. But over time, the key thing one comes to realize that the ocean is a vast, complex, inter-dependency and that we meddle with it at our peril.

The reduction of sharks in the Sea of Cortez has led to an explosion of the Humbolt squid population. The Crown of Thorns starfish are devouring the Great Barrier Reef because the snappers (which feed on their larvae) have been over-fished. And don’t get me started on plastic… So the most impressive thing wouldn’t be a single species, but rather, a healthy thriving habitat.

Okay, the fun part now! If you were a superhero, who would you be?

I’d be the Electric Eel. “But there’s no such hero”, I hear you say. True, but all superheroes are imaginary, aren’t they? And mine would have any number of shocking adventures.

Apart from completing your novel, anything else you’ve done recently that you’re proud of?

I’ve taken up speech training – it’s a great experience. I was pretty surprised when a room full of people laughed at a joke in a speech I made last night. It was a great feeling!

What can we look forward to next from you?

Something in the Water will be supported by a series of short stories that reveal the backstories of the major characters in this world.

Something in the Water: available on Amazon http://bit.ly/SITWbtour2am

Something in the Air:

Something on the Fly: coming soon! 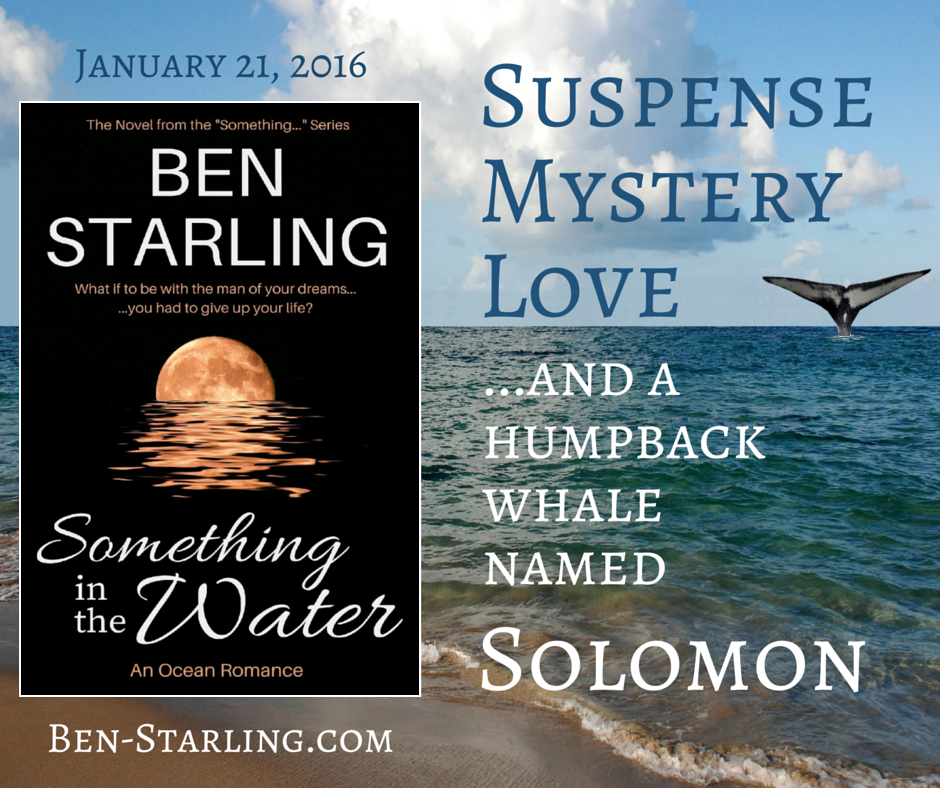 Something in the Water – Chapter 1 begins…

He didn’t look like the hotel guests, the business people, or the tourists. He didn’t move like them either.

He brushed past me as I climbed off my Vespa, stilettos in hand, outside the entrance of the Waldorf Astoria. Had he smiled at the radiance of my scarlet ball gown? Or was he amused by my battered Converse sneakers?

As a valet approached to take my scooter and helmet, I spotted my boss, Malcolm, waving hello from the lobby. He was approaching the glass doors that separated us when I noticed a small wooden box on the ground. Two steps later, I had picked it up. Who could have dropped it?

No one was close by, so I turned. The only man who’d passed me was already a half block away, gliding beside the cars that waited for the lights to change at the end of the block. Was it his?

What I knew for sure was that now wasn’t the time to be tracking down the little box’s owner. I should hand it in to reception and concentrate on the evening ahead. For a few seconds, I relaxed as I studied the hotel’s confident, soaring opulence—a world unknown to me before my arrival from Nantucket four years ago. The smooth texture of the box, however, drew my thoughts back to it. Was there something valuable inside? What if it did belong to that man, and he never returned to collect it? I turned the box over—and caught my breath.

Malcolm emerged in front of me. “Hello, darling, you look absolutely—are you okay?”
I thrust my sparkly evening shoes into his hands, and hitched up my shawl. I was about to give chase when a convertible Ferrari lurched to a stop beside me.

“Going my way, babe?” its driver shouted, over the thrum of the engine.

But my dress was redder, and I got the better start.

You can find the rest of Something in the Water, Chapter 1 at http://ben-starling.com/chapter-one/

Ben Starling is passionate about marine conservation and boxing, both central themes in his upcoming novel. His interest in marine life has taken him across three continents over the past three decades. He is Oxford’s only ever quintuple boxing Blue (varsity champion five years running), was Captain of the university boxing team, and coached and competed until a few years ago. He is 6’3”and 192 lbs. Ben graduated with a Master of Arts and a Master of Philosophy. He was born in the USA but has lived in the UK since childhood.

Connect with Ben at www.ben-starling.com and: