Jess runs away from a life of violence to become an outcast only to find Escaping the Caves is harder than she thought. 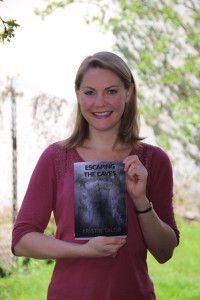 I’ve always loved to read and write, and did Creative Writing the summer of 2010 at the University of Edinburgh. That was a real eye-opener as I got to meet so many wonderful people who also wanted to write. They inspired me to ‘just go for it’. Even so, I spent some years doing other things. I got a degree in social work, worked and lived in Ghana for a while, before I realized that I’m better suited for what I really want to do, which is write. I’m currently studying journalism in Oslo, while I continue to write stories in my spare time.

“Escaping the Caves” is my first published novel, but I’ve been writing short stories and books for the past eight years. Attending the Creative Writing Course at the University of Edinburgh in the summer of 2010 was a real turning point for me . That’s when I admitted to myself and others that being a writer is who I am, what I want to do. I’ve always thought about starting a website and a blog as a way of sharing thoughts about writing and life in general. Once I got a publishing contract, I finally got the push I needed to do just that. I’ve just started out, but hope it can be a way for me to connect with readers and others who enjoy writing. In addition to blogging about life and literature, the website is a place where I can post small short stories, as well as writing about my own up-coming books. Apart from the happiness writing gives me, I’d just like for people to get as much joy from reading my stories as I enjoy writing them.

This is not the story of how the world ended. No one really knows how it ended. All that is certain is somehow, somewhere, someone screwed up.

For generations, Jess and her tribe have guarded the entrance to the caves, protecting the human world from the demons within. The bloodthirsty creatures, once the cause of humanity’s downfall, seek nothing more than to finish the task.

Caught in a web of grief, Jess flees the tribe for the outside world, becoming an ‘outcast’. She crosses the desert, seeking out a new home away from the fight, but her warrior’s scars make it a difficult life, the center of a propaganda-fuelled hatred unparalleled in her old world.

But when Jess finds a home, she finds that her old life will not be forgotten so easily. The demons have found a new exit to the cave.

Click here for additional giveaways on the Brain to Books Blog Tour.

The book will be available in ebook format at:

The book will be available in print format at:

Barnes & NobleAmazonChapters
All book stores worldwide can order the book off the Ingram list. Several book stores in Ontario will hold stock.