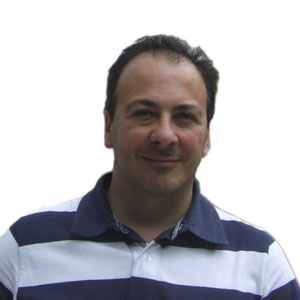 Marco Marek was born in Turin, Italy. He always had a fervid imagination and a passion for fantasy stories, medieval magicians, ancient history, and unexplained mysteries. While he was visiting a castle in Eastern Europe, he had the idea of writing Hyperearth.

Apart from writing, Marco is also a painter and photographer, he likes digital artwork on Photoshop. The cover of Hyperearth is his creation. He loves traveling when he has some free time.

Mary and Martina alone in this unknown dimension. Will they succeed to go back home safe and sound? Read it to discover it!

Enticing cover and story, June 24, 2015
By susanne leist, author of The Dead Game
This review is from: Hyperearth (Kindle Edition)

The story is as enticing as the book’s cover. It is full of fantasies and creatures. Perfect for children and adults. Mary and Martina, two teenage girls, find a portal in a castle to a new dimension. There they must fight an evil wizard named Sathon. Their adventures are unlimited in scope like the author’s imagination.

Martina smiled and said softly, “Mary, read here. Count Lasky had more than one room for his experiments,” she began, 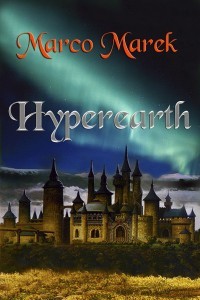 “but they have never been discovered. It is said that there’s a book that reveals many hidden secrets of the Count; one of the most important is how to work the magic using the stone mirrors, which transports the person to Hyperearth.”
“Hyperearth?” both exclaimed.
“I’ve heard of Hyperspace… but never of Hyperearth,” Martina remarked.
“Shhhh,” a few people hushed at the two girls, who then lowered their heads, taking notes.
“According to this text, the book of his magical secrets is hidden somewhere in the room where we were,” Mary said softly. She diligently copied all the necessary information they had discovered, after which the two girls left the library.
“That’s why we didn’t find very much in that room,” Mary added. “If we can find that book, we’ll figure out a lot more.”
“Yes,” Martina agreed. “Let’s review our notes and, if we have to, we’ll return to library.”
“Doesn’t it seem odd that this room has never been visited, or seen by even a few?” Mary pointed out.
“That’s true, but since there doesn’t seem to be much of interest in it, not many people have considered it important. Also, without knowing where the book of magical secrets is…” Martina replied.
“Let’s see if the light still comes out from the hole,” Mary said, taking Martina’s hand. When they arrived to the castle, they noticed there wasn’t the blue beam as there had been before, and nobody seemed to have touched nor moved the bushes.
“I remember this branch was exactly like this, I had left it that way,” Martina observed.
“Maybe we should explore more parts of the castle,” Mary proposed.
“Well, maybe you’re right. Although I don’t think we can see all of the castle, since some areas are closed, but we don’t lose anything by trying,” Martina responded.
The front entry of the castle was massive, with two Gothic towers that over the centuries had darkened with dust and age, and old, menacing statues of gargoyles on the façade.
Entering the reception hall, the girls headed towards the chapel— personal to the Count— and then walked through the wineries. Finding a map drawn on the castle wall, the girls stopped to determine the quickest way to get to the room where they’d been yesterday, and in order to not get lost doing so.
Having reached a long corridor, Mary said, “The notes say that those who find the symbol of the Lasky family somewhere in this corridor will unlock the first clue to opening the door to the room.”
“Well, let’s take a look,” Martina replied, and the two spent a quite a few minutes searching the walls, all to no avail. Just then, Mary noticed something.
“Look at this, the two crossed swords with a rose between the points!”
“That’s true; it’s a bit worn out, but it’s definitely the symbol of the Count. Try moving the swords,” Martina said impatiently. Only, when they attempted to rotate the swords, nothing happened, as the two blades were firmly fixed on the wall.
The girls were disappointed, ready to give up. Just then, an idea struck Martina. “Let’s press the rose.”
Although the swords were unmovable, the rose appeared to be like a button. Martina looked to either side of her to make sure nobody was nearby, and then pushed her fingers down on the symbol of the flower. Suddenly, they heard the sound of locks opening! The girls were ecstatic that they had found the first clue.
“Good,” Mary said. “Now open the door.”
The only problem was they discovered the door in front of them refused to budge. They turned left and found another door a short distance away, which was half-closed.
“Let’s try here, since it’s open,” Martina suggested, but as they entered, Mary panicked.
“If the door stays open now, someone could see us here,” she stammered.
Martina turned around to shut the door, but barely had to touch it before it closed by itself! The girls hastily tried to open it again, but it was useless.
“Oh no! Now what should we do?” Martina said in desperation. It was only then that the girls realized they weren’t in the room with the luminous stone surrounded by mirrors. They attempted to read their notes for directions on where to go next, but weren’t able to find anything helpful.
“At least we’re not in the dark,” Mary commented, pointing to a small skylight.
The tiny room was furnished with desks, two chairs, a cupboard of stained glass, and old pictures, all covered with lots of dust.
“It seems like nobody’s been here in a long time,” Martina observed.
“Yes!” Exclaimed Mary. “Nor do I think we should stay very long! Let’s try to figure out how to get out of this place.”
The girls spent nearly an hour sitting on the floor, contemplating an escape plan. Finally, they both noticed that the chairs, furniture, and upholstery displayed the symbol of a cornucopia.
“Look for the cornucopia,” they both said in unison, hoping to find it somewhere as a means of unlocking the door, just as they had found the swords and the rose.
Searching diligently, they finally caught sight of a door bearing the cornucopia symbol, hidden halfway behind the cupboard.
Mary examined the symbol and said, “It’s made of metal, but it doesn’t seem like you can press it.”