Talk about an epic cover! Happily, the writing in Matt Harrill’s Hellbeast follows suit. Matt sent us an excerpt of the book – the part during which the cover actually happens – and it delivers the action and excitement promised by the cover design. And did we mention it’s epic? We’re talking demons, a sword called the Well of Souls, a six-pointed star, and the name Exerrocks. What more temptation do you need to buy this book? If that doesn’t do it for you, have a read of the blurbs below.

The fate of the world is balanced on a knife-edge. Despite everything Madden and Eva have been through to prevent it, the ARC Council is in disarray, demons roam the Earth. The Apocalypse is closer than ever. The solution couldn’t be further from her grasp. 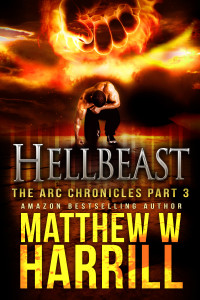 Her baby is gone, the only means of following her destroyed. Eva is left on Earth with Madden and her friends, and a gaping hole in her heart.

There is no time to take stock. The ARC Council is shattered, several members dead or disappeared. Decisions need to be made. This is far from the end. As demons start to find their way onto earth in ever increasing numbers, Eva is given an ultimatum: sacrifice herself, or sacrifice her daughter Nina.

With Madden, Gila, Swanson and numerous allies, Eva must find a way to reach her daughter before it is too late… 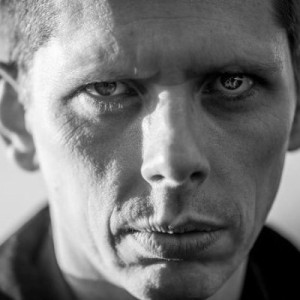 Born and raised in Bristol, England, Matthew W Harrill is an international award-winning horror author. His series, ‘The ARC Chronicles’ consists of Hellbounce (which has received acclaim at the Halloween Book Festival, the London Book Festival and most recently the 2015 International Book Awards), Hellborne and the final book of the series, Hellbeast is imminent.

In addition to his mentor David Farland (The Runelords, The Courtship of Princess Leia [as Dave Wolverton]), Matt is always thankful to know the British author Juliet E McKenna, who has helped him countless times. He is a fan of fantasy, loving Robert Jordan’s Wheel of Time series. He also has a lot of time for the truly bizarre horror of H P Lovecraft, citing this as an influence on his work. He also cites the fictional author ‘Hank Moody’ as an influence.

Matthew has worked as a labourer, a barman, a cleaner, a joiners mate. In addition he has dabbled in commercial insurance and has for the past 12 years implemented share plans for Xerox.

When not working, Matthew enjoys tennis with his son, watching movies and television series such as Supernatural and Grimm, blogging and cookery.