Humor isn’t easy to write. In fact, it’s one of the hardest things to write because of how easily the punch line can be blown. Predictability will kill anything funny and at the same time, what you write should be as universally funny as possible, not only appealing to a few people who will know what you’re talking about.

Quanie Miller’s first book, It Ain’t Easy Being Jazzy, hardly seems like her first. Her natural writing style makes you think she’s a seasoned pro. You won’t be able to help laughing out loud, and I mean that quite literally.

I interviewed Quanie recently about writing, her novel, and her hilarious yet relatable characters.

Yes, this is my first book! It probably took me about 3 months of planning before I started writing.

I definitely have to outline when I write. I think of outlines as a roadmap. Sometimes I follow it or sometimes I veer off course a bit, but I always need to know where the story is headed.

What drew you to this genre?

I’ve just always loved writing funny stories with over the top characters who are always getting themselves into these hilarious situations. It’s a lot of fun. Sometimes they do or say things that I hadn’t anticipated. I laugh out loud a lot while writing.

Do you mostly write in this particular genre or do you write in other genres too? If so, which ones?

I also write paranormal novels. In fact, I was trying to write a paranormal novel when I sat down to write It Ain’t Easy Being Jazzy.  The novel was supposed to be about a woman who accidentally gets a job as a nanny and later discovers that the children’s new stepmother has mystic powers. So I start the story with the main character getting a flat tire in this affluent neighborhood and cursing her GPS for getting her lost. I was going to have her ring one of the door bells and get mistaken for an interviewee by the woman of the house. But when I started writing, she never made it to the house. She called her best friend to get directions and the banter between those two had me laughing out loud. I stopped and thought, “But wait a minute. This isn’t supposed to be funny!” So I had to take a step back and decide if I wanted to scrap what I had and rewrite it to make the tone consistent with a paranormal story or go in a completely different direction and write the funny story. I decided to write the funny story and I’m so glad I did because Jazzy and her family were a hoot to write (I later ended up writing the paranormal story. It’s called The New Mrs. Collins and will be out next year).

Well, Jazzy is a Louisiana girl living in San Jose, California. She’s hilarious and she’s also got this southern sass about her, so when she meets all of these really quirky characters in Silicon Valley, some really funny situations occur that I think readers will enjoy.

Are any of the characters in your book based on people you know or have seen/talked to in real life? I’m especially interested in Aunt Cleotha with this question!

I think that all of my characters are some variation of me, my family and friends. I grew up around really funny and sassy women who didn’t mind telling you about yourself! You wouldn’t believe how many real life Aunt Cleothas I know!

Who’s your favorite character and why?

Definitely Aunt Cleotha. I cried laughing while writing her. She’s so funny and gives it to you straight no matter who you are.

Are you planning on writing a sequel? When can we look forward to it being published?

I am! I’m actually in the outline phase right now and hope to have it out within the next year.

Oh, yes. It’s all I talk about so I’m sure I drive them crazy!

I’m especially inspired by dialogue. The things that people say during conversation! It’s a goldmine for stories. Little quirks that people have also give me ideas for characters or sometimes I’m sitting there doing nothing and I’ll get this visual of a character doing something intriguing and I’ll go, “Whoa! Who are you?” I also get ideas by just watching people. For instance, my husband and I went out to dinner the other night and there was this seemingly nice couple a few feet away from us. I thought to myself, “They seem nice enough. But what if they’re over there plotting a murder?” And just like that the wheels start spinning.

Do you have any advice for other writers?

Check out It Ain’t Easy Being Jazzy on Amazon: 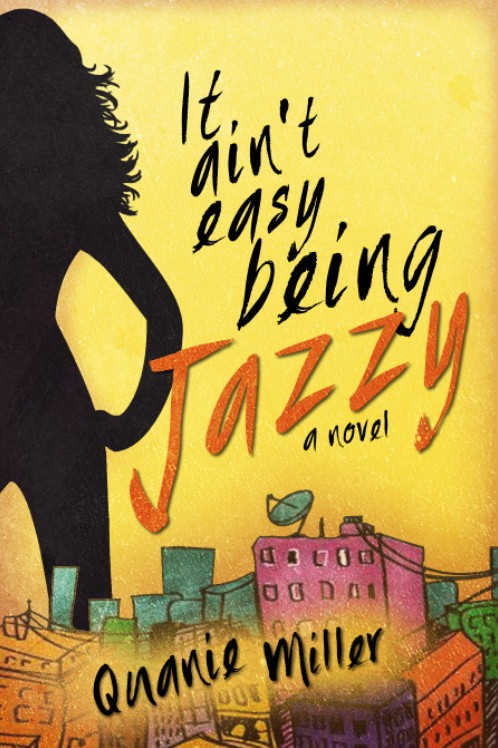