Author TC Michael describes himself as being “an epic daydreamer with a wild imagination”, and nothing could better prove this description than his first full-length novel, Secret of the Last Born. The first in the Dark Rising series, Michael mixes common fables and folklore with his own complex fantasy world in a unique, action-packed book of mystery,  romance, and self-discovery. Proof Positive is excited to share our interview with this burgeoning young author.

Yes and no. This is my first full-length book, but I have had a few short pieces published in the past. With this being my first novel I realized after I wrote the book that there is no “too much” or “too long” on planning. I spent roughly two months in the planning phase before I started the first rough draft.

Yes! Secret of the Last Born is book 1 in the Dark Rising series. Book two will be out no later than the end of February, but there isn’t an official release date yet.

So far I have only written in the fantasy genre, but I definitely have plans in the future to expand that reach.

Secret of the Last Born is a story about magic, love, and loss. It’s full of twists, turns, and conflicts. But I think the main reason that it stands out from the rest is because it has a good sense of realism. Not in a direct way, but in a way where magic doesn’t take over and the reader forgets about the real world that the characters live in. You will always be able to find a sense of connection with the characters because they are like you, and probably in more than one way.

I would say most of the characters seen in Secret of the Last Born are based upon multiple characteristics from multiple people. I definitely like to base fictional characters on people in real life, but in this book that isn’t the case. As planning continued I decided the characters would just slowly come together, and that’s what happened.

Most know that I am a writer. There are still a few who don’t know, but all of those close to me know that I’m a writer, and that’s what I love doing. I would say “surprised” would describe maybe a quarter of them. Most of them expected it because I’ve always loved writing. I have had a really supportive family to keep me going.

Many things! Other books, wonderful authors, mostly life events – both bad and good, and a very good imagination. Throughout my younger years I used to spend countless hours every day imagining different worlds, and imagining our world if things had gone differently in the past.

I am not part of any writers’ groups…yet. But I will be soon!

I think many authors have one set routine, and some authors just go with whatever they think will work for that specific story they want to tell. In a sense, I’m the type that will go with whatever they think will help the situation the best, but I am beginning to form my own routine. With Secret of the Last Born, I realized the method that works very well is as follows: Get idea>brainstorm details>list details>character ideas>form characters and character backgrounds>outline (at least two drafts)>ask others what they think about the idea. This is the basic structure of preparing; there are several smaller details that I didn’t add, but you get the point.

Yes, and research is harder work than most think! You have to search for long periods of time until you find exactly what you’re looking for. Even if it’s only a minor detail. With this being my first full-length book I feel like I could’ve done a bit more research, but hey, it takes practice to become a great writer. Research is very important for all books, and I think without it you would have a story that no one is interested in.

Oh you better believe it. I read all kinds of books, but probably 85% of them are in the same genre I’m writing. Movies are a little different; I’m a huge move fanatic, I love watching movies of all kinds. I certainly watch a lot of movies in the same genre though!

If you could write anywhere in the world – in a fictional or non-fictional place – where would you write?

1. At home 2. At any huge, quiet, shady park 3. On the mountains. There are too many fictional places to count, but I would write at all of those places too!

Check out Secret of the Last Born:
Amazon US
Amazon UK 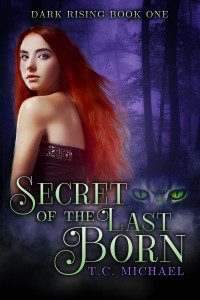