Welcome to the launch week for Karen J Mossman’s novel Star Struck! Today all the way through September 20th, Karen will be visiting a variety of blogs on her tour. Keep your eyes open on Twitter and Facebook for announcements. And now, without further ado, let’s dive into Star Struck. Congratulations, Karen!

Karen J Mossman’s parents were foster casers, with four siblings and five foster children, and so she spent her early days telling them stories.

“I used to make up fantastic stories, throwing my arms up to emphasise things as their eyes grew wider and wider! Although I wasn’t inspired to ever write for children.”

As a teenager, it was a means of escape. Karen wrote stories to take her away from the madhouse of her home.

Years passed and Karen wrote for pleasure, advancing from notebook, to typewriter, and eventually to computer.

“Writing straight on the screen and being able to backspace, delete and add text was a revelation to me.”

In 2013 after being made redundant she decided to write full time. Over the years she wrote many short stories and decided to self-publish in anthologies with a theme. The first was The Missing, as Karen was fascinated as to why people vanish. Behind the Music followed – because she was intrigued about the real people behind stardom. Finally Heroes came along, as she loved a good romance with a twist.

When life throws you a curveball, who will there be to catch it?

A story of love, loss, betrayal, friendship and kinship set in 1980s Manchester, with music 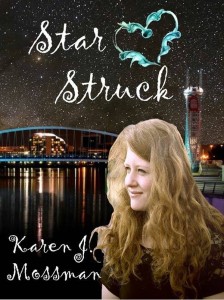 and music of the day.

Joanna Nelson is escaping a broken romance and there is nowhere better than with her sister in London. On the train she meets a mysterious stranger, then in London, a wide-boy cockney, and eventually arrives home with an even more complicated life.

She is also haunted by her childhood, and when her mother turns up, it brings back awful memories. All have consequences that she still carries with her. Thank goodness for her sister and friends to support her. The trouble is, it can get complicated when her best friend is a ‘he’.

Just as Joanna gets her life back on track, everything is turned upside down. Who of her friends will be there for her? Or will she find herself alone?

I found the book to be full of complexity. Joanna is presented with a keen depth of character. Karen J. Mossman brought the layers in this book alive with excellent detail.

Without losing the main story Mossman brought several other smaller storylines into play in a lovely and engaging manner.

This is a story of love gained, love lost, friendships forged and familial connections. Emotional and personal growth occurs amid personal friendships and human interactions.

Mossman, in my opinion, writes fluidly, creatively and delivers a poignant story to the reader.

Unconsciously, the sisters had dressed similarly. Joanna was wearing a short pink skirt and Sandie was in a short yellow one. Their tops were similar too, in contrasting colours and with wide shoulders. Sandie had back-combed her long hair till it was full around her face and she wore a scarf as a hair band. Joanna had moved her ponytail to the side of her head, wrapped it in a pink tie-dye, and let it fall in a long loose drape, to move with her hair.

Joanna knew that being with each other made them both feel good; they felt strong because they were a unit that fitted together. They didn’t need to say things because they understood each other so well. Quite often they would say one thing, but each knew they meant something else entirely.