Many authors say that their characters lead their story places they didn’t know it would go. How about a character whose entire personality changed when her author gave her a new name? Josh de Lioncourt’s guest post is an outstanding example of characters who take over their own stories to help everything come together.

On the opening page of The Adventures of Tom Sawyer, Mark Twain writes, “Huck Finn is drawn from life; Tom Sawyer also, but not from an individual—he is a combination of the characteristics of three boys whom I knew, and therefore belongs to the composite order of architecture.”

This is true for most, if not all, literary characters whether or not the author realizes or acknowledges it consciously. Writers draw from their life experiences, people they’ve known, and things they’ve loved when telling a story. This is, perhaps, the most basic and unchanging truth of writing.

But it’s true of each and every human being on the planet as well; we are all drawn, colored, and sculpted into the individuals we become by the experiences we have had, the friends or family who’ve touched our lives, the things we’ve discovered, and the places we’ve been. Or, to use Mark Twain’s more eloquent phrasing, we all belong to the composite order of architecture.

As I write this, Harmony’s Song, a short story that ties into The Dragon’s Brood Cycle 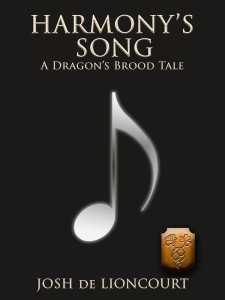 series of novels, has just been released, and I find myself reflecting on the bits and pieces of my life that inspire my work, make me the person I am, and influence the characters I create. It’s always easier to connect the dots looking back, at least for me. I’m rarely, if ever, aware of the sources of my inspiration while I’m writing.

Sometimes I rediscover a phrase I wrote and see it in a whole new light that reminds me of some author I admire; sometimes I hear the echoes of those I’ve known in the voices of my characters; sometimes the words or melody of some old and well-loved song surfaces as I read over a scene or wander along forgotten passages. Most times, though, lightning simply strikes, and it’s fun to just let the magic of creation run its course and not bother with the whys and wherefores of the fickle Muses; they are as likely as not to rescind their blessings.

But there are times, too, when the universe simply gives you a gift, and it’s best to accept it with grace, even if that means rewriting large portions of your current project.

I received a gift like that while writing Harmony’s Song. The story’s title character began life in my imagination and then in the bits and bytes of my MacBook with an entirely different name. Daniel, an orphan living on the streets of Ravenhold, befriends a new orphaned girl who comes to town, and who was, in the earliest draft of those first few pages, named Shanna.

One Thursday afternoon, after I’d written perhaps a third of the first draft, I was taking a break and enjoying a game show. One of the contestants was named Harmony.

What a pretty name, I thought, and then I went on listening to the show.

It wasn’t until the show ended that I found myself wishing that I’d bestowed the name Harmony on Daniel’s friend. It would’ve made such a perfect name for her, I thought.

It was then, of course, when my conscious mind finally caught up with my subconscious. I could name her Harmony. It would be the perfect name.

And so began the process of what I thought would be a simple swap of one name for another. If you’ve read the story, you’ve probably realized by now that it didn’t turn out quite that way.

As I read through the first part of the story, exchanging each “Shanna” for “Harmony”, something strange began to happen. The character’s new name took on a life of its own, working its way into the fiddler’s songs and, I hope, into the very fabric of the character herself and the story as a whole. While the basic plot remained the same, the tale of Daniel and his mysterious friend acquired a luster that hadn’t been present in the earliest draft. It resonated, and I loved it.

In music, two notes played together makes an interval; three notes, harmonious with one another, make a chord. But the real magic is frequently when two or more independent melodies weave together to form something better—something bigger—than any on its own. It is the wedding of melodies into something beautiful that separates the lullaby from the symphony, or, in literary terms, the one-dimensional character from the fully realized soul who lives and breathes within both the confines of the page and the wide open spaces of our imaginations.

It’s a miracle of sorts how one creature, whose parts have become more than their total, can breathe life into another. Since time out of mind, humans have disdained flat and lifeless characters of prose and poetry, while simultaneously doing the same to those living in the real world who defy the norms of convention.

In the end, whether we are a Tom Sawyer, an orphan on the streets of a mythical city, or just another human being trying to make our way through life, we all gloriously belong to that composite order of architecture. May we celebrate that, and may we make the sweetest of harmonies.