Posted on September 24, 2020 by Christie Stratos

Looking for a good LitRPG novel? You’ve found it! Written by award-winning dark fantasy author Joshua Robertson, LitRPG novel Ball and Powder combines Robertson’s passion for great fantasy writing with his love of gaming for a fantastic, bombastic, fun, and adventurous book. Originally released by Echoic Mobile Press on their app, now you can have it on your shelf too.

You better be ready for a rip-roarin’ good time, mmhmm!

Ball and Powder is a character-driven steampunk fantasy about a thick-skulled, hornless 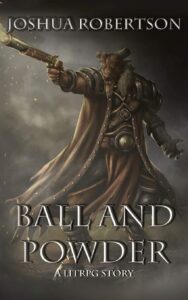 minotaur named Ham Herdstomper who lives to snort blood leaf and go dungeon crawling. Created to die and then be reborn again, he has not known much more than the rush of gaining experience, getting chips, and buying more of his precious drug. However, when he begins a new cycle on Moravan with his bomb-tossing gnome companion, Nickl Nackle of Clan Paddiwackle, their dark adventure begins to weigh on Ham’s morality and causes everything to change.

While in pursuit of a death-dealer, Ham’s mood turns for the worse along with his addiction, causing him to make decisions that negatively impact his alignment. When their newfound companions, Kildrak the dwarven sharpshooter and Beans the gun enthusiast, point out Ham’s faulty reasoning, the fellowship begins to fall apart. Thinking the death-dealer is to blame, Ham must discover how to realign his moral compass before his adventuring party abandons him and he transforms into an evil non-player character.