Fans of the Lucky O’Toole series won’t want to miss the final book that brings Lucky’s life to a roaring crescendo, Lucky Enough. Deborah Coonts‘s signature style is at its best with quick wit, sparks of humor, plenty of mystery and action, and of course Lucky’s somewhat unlucky love life. If you haven’t yet read the series, here’s your incentive to get started—you won’t be disappointed and you have a lot to look forward to!

Home: A refuge. An escape. Where the heart is.

After a high body count trip through Europe, Lucky O’Toole, the Chief Problem Solver for the Babylon, Las Vegas’s most over-the-top Strip casino, is home and searching for peace, quiet and a quick fix for a broken heart.

She should know better.

Her father is failing in his fight to regain his health after taking a bullet to the chest. 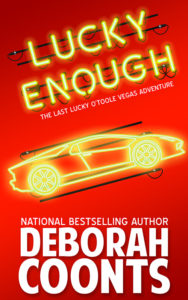 Her mother, Mona, is increasingly desperate to be “useful”, which usually results in her being anything but.

Her love life is in shambles.

The DEA is after her, but not giving a hint as to why.

The NBA is in town for their All-Star break extravaganza highlighting the new rookies.

Somebody got cute and put a Bugatti on top of her hotel.

And a dead guy turns up in delivery bay seven with his skull bashed in.

Not exactly the soft reentry Lucky had hoped for. But she can handle it.

Until her father, after checking himself out of the hospital, summons Lucky for a “family” meeting. A secret from his past puts the future of the Babylon and the family in jeopardy.

And he expects Lucky to fix it.

Worse, a financier who played cat-and-mouse with Lucky around the globe, striving to leave her holding the bag, could hold the key to her saving it all.

Can she trust him?

Does she have a choice?

Find out by getting your copy of this light, funny, romantic mystery today!