Did you ever wonder what might happen if you didn’t die when you were meant to? Author Bradley Cannon explores the possibilities of this in his first novel, Extended Stay. And don’t be afraid to love his work – he’s got six more novels in the works!

Extended Stay is your debut novel (congratulations!). How long did it take you to plan it before you began writing it?

Thanks! It’s been great to finally let people see what I’ve been working on. The beginning ideas for Extended Stay taunted me for about a year before I finally figured out how to go about writing it. I had a theme in mind all along, but the actual storyline took a while to develop. I have no idea why the pieces of the puzzle finally came to me when they did. I didn’t question it at the time. I just jumped right out of the shower at that moment (no joke!) and ran around the house wet and butt-naked for the next hour to write down all of my ideas.

I have never had so many plotlines and themes come to me so quickly for any other novel. I outlined more than half of Extended Stay’s chapters that day and began writing the first draft by the end of the week, which took around nine months to complete. The next seven drafts took four years. Then the publishing process took an additional year before the book ultimately became available January 26, 2015.

Do you typically plan your writing out with outlines, character development exercises, and other pre-writing activities? Or do you just write as it comes to you?

I always have an overarching outline of where a novel should go, chapter by chapter, from beginning to end before I start writing. I do this because I find that the constant worry of wasting six months only to corner myself with no proper conclusion slows me down more than any creative freedom would otherwise speed me up. However, I don’t think writers should ever be afraid to deviate from an outline if a particular scene or moment compels them to do so.

As for writing activities, I usually only do character development exercises if I am creating a character who is not partially based on a real person (or people) that I already know. My favorite prewriting exercise is to visit a location (e.g., a swamp, a bus station, or a movie theater) before writing about it. I do that often!

Your book, Extended Stay, is based on the idea of nobody dying within a 50-mile radius of Chattanooga, TN for 30 days. Is this concept about overpopulation and its effects, people taking life and death for granted, or something else?

Have you ever wondered why someone you knew had to die the way that they did? 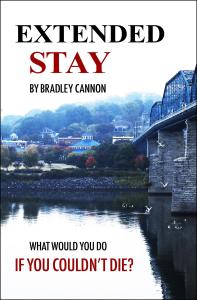 Extended Stay is my opportunity to express the answer to that question by showing how bleak the world would become if people never died at all. Along the way, many characters lose their sense of purpose and begin to make bad or reckless decisions to reveal why death, in all of its gruesomeness and bluntness, is actually a very necessary part of being human.

What do you think makes Extended Stay stand apart from other works in its genre?

There are numerous stories where an immortal character tells a mortal character about how tired or hardened they feel because they have lived for hundreds or thousands of years. However, the majority of Extended Stay spans a mere 30-day timeline in order to show a big picture of how quickly people would begin to change if they couldn’t die. That’s been a really fun angle to pursue that I haven’t heard as much about in the past.

Also, the Final Destination series is a major source of inspiration for the novel. However, Extended Stay focuses on the fact that people are not in control of when or how they will die, and then the novel goes on to show how this may actually be a good thing. As one reviewer put it, Extended Stay “makes readers think about their lives, privileges, and surroundings.”

It looks like you have two more books in the works, one literary fiction and one historical fiction. Extended Stay is gritty commercial fiction. Which of these three genres would you say you like writing the most, or do you like them equally?

Each novel and genre has had its own unique set of challenges. I suppose I felt the most comfortable writing Extended Stay. The novel has a lot of characters, each with their own storylines brimming with opportunities to pull in different readers. This forced me to do a little more research than usual, but it also gave me a lot of wiggle room to switch between stories on bleak days when I was feeling less inspired. Also, the idea of writing about people who avoid more than 40 forms of death was a blast to write about, and it created varying levels of suspense in each and every chapter. I didn’t want the novel to become some 800 page philosophical tome, so I took the fast “gritty commercial fiction” route instead, which I found to be an especially exhilarating and entertaining style to write in.

On the other hand, my literary fiction novel, The Wholesome Bell (coming summer 2016?), has been a little more challenging. In this novel, four uneducated men move into a doublewide trailer and create a bunch of utterly outrageous rules that they believe will bring them closer to happiness. Fortunately, I had already learned the value of writing about a familiar location in Extended Stay, so I placed The Wholesome Bell in Collegedale, TN to ensure that I always understand the setting. There is also a lot of dialogue in The Wholesome Bell, which I tend to struggle to describe after a while, especially when I am trying to be…well, “literary.” The solution to this problem has involved reading a lot of dialogue and implementing a variety of language tools, such as direct quotes, indirect quotes, summaries, and so forth, depending on the situation. The biggest difference between this novel and Extended Stay is that The Wholesome Bell is written in the first person, meaning that readers will have much more time to get to know a small group of characters, especially the main protagonist and narrator, Nick Johnston. That’s something I really wanted to try out after writing Extended Stay.

The historical fiction novel Darling, Schatzi has been the most daunting by far. This novel is about my grandmother’s experience growing up in pre-WWII Germany and how she eventually fell in love with my grandfather, an American soldier. The first draft of this novel is now finished, but there were many times that I had to go “over the hill and through the woods to Grandma’s house” for backup. I’m sure I’ll have to visit her again as soon I start working on future drafts too. After all, how was I ever supposed to write about life in pre-WWII Germany when I couldn’t even imagine what life in pre-WWII America was like? I really could not have completed the first draft without my grandmother’s support. I have spent many hours speaking with her to get all the pieces of her journey, which I believe has revealed a truly miraculous story of incredible growth and courage.

Did you do any research for Extended Stay?

I wish I could say no! Unfortunately I am not a police officer, lawyer, oncologist, exterminator, or any of the other professions that appear throughout the novel. I did use several locations and occupations that I do understand (e.g., lawn maintenance! Haha!). However, I also have had to ask people questions about everything from Catholicism to their experiences during a tornado in order to make sure the story remained both credible and incredible at the same time.

I would write in a soundproof room with nothing visible in front of me except for a computer screen and a keyboard. Even the desk and chair beneath me would be invisible. The Internet would only work for occasional research. The room would have no door, no telephone, and it wouldn’t let me out until I complete at least 1,000 words. A slot where snacks magically appear would be a great bonus.

Going out into the world to discover new stories is integral to write any book, but privacy away from all distractions is absolutely necessary as well. This is not to say that I always want to be secreted away. For this magic writing room to be truly perfect, it would also stop time while I am inside so that I can see family, friends, and readers as soon as I get done. I greatly appreciate all of your support over the years and look forward to seeing and hearing from you at each and every opportunity. 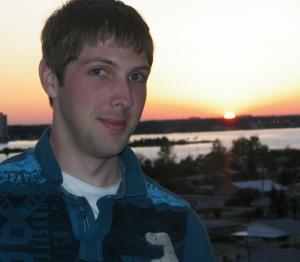 Bradley Cannon was born March 26, 1991 in Cleveland, Tennessee. He attended Bradley Central High School and recognized his interest in literature at the early age of 15. After that, a few long-winded ideas spiraled into several novels in excess of 100,000 words each. So far, six complete novels have emerged, all in different draft stages from one to seven.

Bradley graduated from the University of Tennessee at Chattanooga as an English Major/Communication Minor in summer 2013. Besides getting up early to write, he also works as a writer for Psi Chi Central Office, the International Honor Society for Psychology.

Bradley is now 24. He enjoys criticizing and praising television and looks forward to one day creating his own continuing selection of work. On his birthday, he proposed to his wonderful new fiancée, Leslie. They married in the summer of 2014.

You can view the first few pages of Extended Stay for free, check out customer reviews, and purchase a print or Kindle edition of the novel at Amazon.com HERE.

The Extended Stay video trailer is available on YouTube.com HERE.