I recently had the pleasure of interviewing historical romance and fantasy author, Donna Hatch. You may know her from her Rogue Hearts series, including The Stranger She Married and The Guise of a Gentleman, the latter of which was recently released (check it out here!). If you’ve ever doubted that happily ever after exists in real life, Donna’s books are perfect for you. Even the most unlikely characters can find each other and fall in love, not just in lust.

It seems that most (if not all) of your books have a main female character who defies society’s norms romantically. Would you describe yourself the same way? What attracts you to writing this kind of female character?

I guess I’ve always felt like a fish out of water. To say I was shy and geeky in my school days would have been an understatement. I still am, but not as shy. I do have a strong rebellious streak and tend to balk at rules but I also have very “old fashioned” ideals so I often end up feeling like I don’t really belong anywhere. I suppose a lot of that comes through my characters. But I also write heroines this way because I think most of us have felt alone in a crowd at one time and if my heroines feel that same way, readers relate to them. My goal is to write a heroine that readers relate to and heroes that readers fall in love with. If I have accomplished that, then I am successful.

What first sparked your interest in writing novels? Was there a particular story or point you wanted to get across?

Writing seems to be some kind of sickness and there are times when I wish I could be cured! Seriously, though, I’ve been writing since I was about 8. At first, it was just something fun to do. Later it became somewhat therapeutic. Occasionally it was an attitude of “I can do better than this book” My fantasy was a story that just wouldn’t leave me alone, and it went through many revisions before I decided to really try to publish it. It took years because I lacked confidence and know-how, both writing skills and how to find a publisher. My first Regency, The Stranger She Married, evolved from a desire to tell a kind of beauty and the beast story with a twist. That story, too, underwent many revisions before I landed on the current plot. By the way, I have about ten completed manuscripts that I wrote which are so bad that they will never see the light of day, so I had a lot of practice before I did it for real.

I belong to a local chapter of Romance Writers of America (RWA) as well as an online chapter of RWA specifically for Georgian and Regency authors called The Beau Monde. I also belong to American Night Writers Association and LDS Story Makers. I love having the support of like-minded people who know what I mean when I say wacky things like a secondary character keeps trying to take over, or the hero is being a jerk and won’t do what I want him to do. It also helps to complain to a group of writers who get it when I’m having a bad day such as a rejection or a less than perfect review, and who also get it when I have a triumph, like finding an agent, or getting a fabulous review, because they understand how much goes into a writing career. When I share in their woes and triumphs, it reminds me that I’m not alone and that other writers experience the same highs and lows. Writers groups are also great if I want to know anything about a particular publishing house or editor or agent, because odds are excellent someone in my group has dealt with them, so writers groups are a great network. My Beaumonde group is great because we help each other find reliable sources for research specifically for the era in which we write. Another benefit of belonging to writers group is that authors are readers, so we often read each others’ books and host each other on our blogs to help announce new releases.

I love historical books and movies, and I admit I tend to focus more on historical novels than other genres, but I like fantasy, science fiction, action/adventure, thriller, young adult/teen, paranormal, inspirational, biographies. I don’t like horror or erotica, but I’m open to most genres.

Can you tell us anything about your upcoming fantasy genre writings?

I wrote a new fantasy about five years ago, but the computer crashed, and I lost my thumb drive where I had it backed up, so my entire book was lost. I tried to have it recovered, but the file was too corrupted. After a mourning period, I started trying to rewrite it, but I never re-captured the story so I set it aside. I have others in mind, but my agent is encouraging me to build a strong following in Regency before I branch out and try to juggle two genres. Incidentally, I now back up every manuscript in four places 🙂

If you’re not familiar with Donna’s latest book, The Guise of a Gentleman, make sure you check it out. 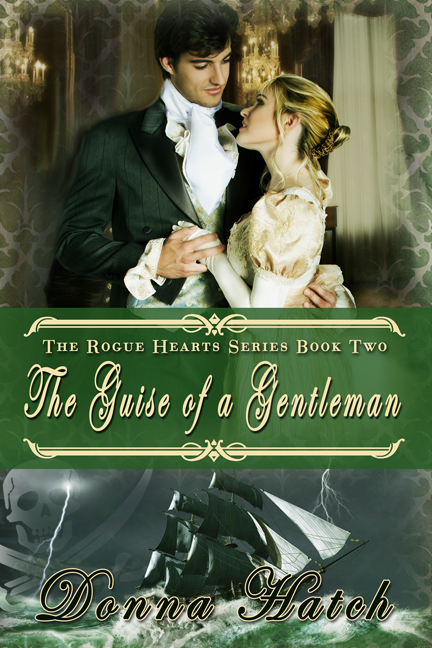 The widowed Elise is a perfect English lady living within the confines of society for the sake of her impressionable young son. Her quiet world is shattered when she meets the impulsive and scandalous Jared Amesbury. His roguish charm awakens her yearning for freedom and adventure. But his irrepressible grin and sea-green eyes hide a secret. A gentleman by day, a pirate by night, Jared accepts one last assignment before he can be truly free. Elise gives him hope that he, too, can find love and belonging. His hopes are crushed when his best laid plans go awry and Elise is dragged into his world of violence and deceit. She may not survive the revelation of Jared’s past…or still love him when the truth is revealed.

I’ve had a passion for writing since the age of 8 when I wrote my first short story. During my sophomore year in high school, I wrote my first full-length novel, a science fiction romance. I wrote my second novel during my senior year, a fantasy romance. Needless to say, English and Creative Writing were always my favorite subjects. Yes, I’m a total grammar geek! In between caring for six children (7 counting my husband), I manage to carve out time to indulge in my writing obsession, with varying degrees of success, although I write most often late at night instead of sleeping. And yes, all of my heroes are patterned after my husband of 21 years, who continues to prove that there really is a happily ever after.