Posted on October 2, 2013 by Christie Stratos

Have you ever heard of the Red String of Fate? Author Stacey J. Mitchell has a new, unique take on it that will keep you turning the pages of her book Read Threads to find out more. What are the red threads? Where are they coming from? What do they mean?

The idea of red threads connecting people was intriguing to me, so I asked Stacey what inspired her idea. She answered in a great blog post, which turned out to be ironic. Read on to find out why.

My first novel, Red Threads, was inspired by a blog post. I was taking part in the 2012 A-to-Z Challenge at the time. If you’re not familiar with the A-to-Z Challenge, it goes something like this: for every day in the month of April (apart from Sundays), you write a blog post on a different letter of the alphabet.

Many people write their blog posts on a theme, and this was something I chose to do. I love history and the subject I had selected was mythology. I chose to write about a number of ancient cultures including Egyptian, Japanese, and Chinese.

This became my ‘R’ post in the A-to-Z Challenge. The idea stuck with me and I started thinking about how I might use it in fiction. What if the red thread didn’t just join two soulmates? Perhaps it could be used as a general indicator of someone’s fate, connecting one person to the most important person in his or her life at that time (and not just romantically—after all, we have so many different kinds of relationships).

I thought it would be fun to write about a character who had the ability to see these fate lines, but didn’t understand what they were. Lily, the main character in Red Threads, has to learn to use her ability, and to help her do this I added characters called Fateliners who guide people through the biggest events in their lives. Opposing the Fateliners are evil entities intent on stopping humans from fulfilling their fate—and in doing this they are trying to create chaos in the world.

As you can see, one thought led to the next and the more I thought about it, the more excited I became. I still find it amazing that a novel (and the potential for a whole series) grew out of a short post.

If you’re not familiar with Stacey’s book yet, make sure you check it out. 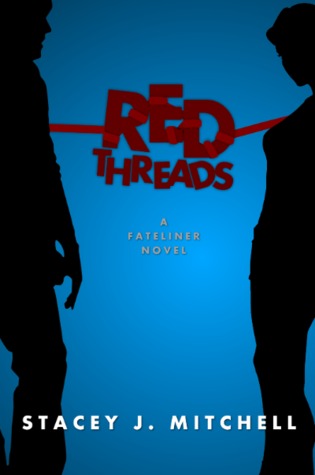 Twenty-six-year-old Lily Robinson has her dream job in a museum, a great boyfriend, and is happy with her life – until the day she starts seeing red threads growing out of the chests of those around her.

That same day Lily meets a stranger who seems to know her and understand what she is seeing. Lily doesn’t believe him when he says she has a special ability, and it’s only when he saves her life that she accepts something very strange is happening to her.
Lily’s life is rapidly turned upside-down when she gets thrown into the world of fate and meets the beings who influence it.

Can she learn to control her ability to help herself and those around her who need it most?
Will she actually want to when she finds out what she has to do?

I am a tea drinker and history geek who lives in south Wales. I love reading, being outdoors, cooking, and stand-up comedy—but I don’t like bananas and insects.

I have been writing stories ever since I could hold a pen. I have a degree in Egyptology, and I love writing so much that I even enjoyed my university coursework.