Here’s a spin on Armageddon: two messiahs emerge and are taken on as leaders of the liberals and the conservatives. Politics mixed with the end of the world? It sounds likely. Which of these saviors is God and which is Satan? Find out in Scott Pinsker’s book, The Second Coming.

Two men claim to be the Second Coming of Christ. Each claims the other is Satan in disguise. But only one is telling the truth. 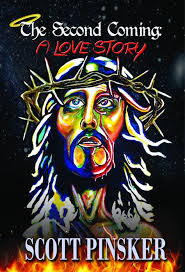 In The Second Coming: A Love Story, the devilish new novel by Scott Pinsker, the culture war between Red America and Blue America turns shockingly real when two self-declared saviors appear on earth. The first “messiah” attracts legions of liberal and secular-progressive followers with his message of New Age brotherhood, quickly becoming the darling of the left. The second “messiah” preaches fire-and-brimstone traditional Christianity, gaining a grassroots army of conservative worshippers ready to battle to the death. It’s finally happened: Red America and Blue America are headed for Armageddon!

The only two things Nate Konrad feared were indifference and anonymity.  As America’s preeminent radio personality and/or loudmouth, he figured out long ago that he who cultivates crowds stays on the air; he who blends into crowds fades away.

Nate Konrad refused to fade away.

Many moons ago, as a longhaired radical with a penchant for rabble-rousing, he dropped out of Yale to pursue his dream of becoming a wacky, irreverent disk jockey.  Many moons later, despite leaving every radio station on rancorous terms (or with litigation pending), he always landed in a slightly larger market, until Konrad inconceivably emerged atop the radio food chain.

He began his career by attracting an audience the easiest way possible: saying outlandish, offensive things, but veiling these diatribes with just enough witticisms to deflect criticism.  Konrad referred to supermarkets in the inner cities as “Negrocery stores,” and demanded that pro-life listeners add nine months to their date of birth when people ask of them their age.  He recommended solving the homeless problem by providing the homeless with complimentary camels—so we could then refer to them not as “homeless” but as “nomads” (and if that didn’t work, he explained, the homeless/nomads could eat their camels and at least get a good meal out of it).  When a famous Mexican-American actress was photographed breastfeeding her baby, Konrad sparked a mini-boycott (and lost the El Pollo Loco sponsorship) when he called her a “Lactino.”  Of course, when anyone took offense, the longhaired radio rebel would silence the offended by claiming they “lacked a sense of humor” or “just didn’t get it.”  But as his articulation increased, along with his knowledge of all things political, he found himself moving steadily to the ideological right.  Basically, he developed the ability to shock the public with ideas rather than insults, and became one of America’s most trusted—and polarizing—authorities on current events.

His world view was simple: The government that governs best governs least; empower the military and police to the utmost possible; feminists are fat and ugly; and finally, if you don’t love the United States of America with every inch of your red-blooded heart, then get out of this country, you ungrateful socialist scumbag.

Tanning salons and Marlboro Reds rendered his boyish features a thing of the past, replacing the rosy hue of innocence with a cantankerous scowl and scaly contours.  He still donned a shiny leather jacket and jet-black sunglasses, as if trying to overcompensate for his advancing age and eight-figure income.  All in all, Konrad was desperate to demonstrate that he’s still the same unpredictable madcap rebel who’s always ready to humiliate the establishment, despite becoming a corporate icon and political kingmaker in his own right.

“Greetings across the four corners of Americana,” growled Konrad through his gold-plated microphone.  “I am the living legend of talk radio, the Deacon of Democracy, the Golden Angel of the airwaves.  My name is Nathan F. Konrad and I can run faster, jump higher, dive deeper, stay under longer and come up drier than any man, woman, or animal on God’s green earth.  And that’s all before my morning cup of Colombian coffee!  But let’s dispense with the catch-phrases for a moment.  Normally, I don’t allow guests to sit in the booth with me.  You see, I view my radio booth as sacred territory, the birthplace of freedom for modern America, and I’m careful about corrupting its purity with outsiders.  But for the first hour of today’s program, I’m making an exception.  Just like the rest of you, I’ve been following the nonstop media coverage of the two men, Joe and Israel, who both claim to be the Second Coming of Jesus Christ—and perhaps more interestingly, also claim that the other is Lucifer.

“Now, as you know, when these, uh, men first began appearing on the television dial, I predicted that it was a publicity stunt of one kind or another and the two, uh, entities were working in unison.  While I still believe such a possibility exists, I’m starting to hedge my bets.  Despite the widespread media coverage, nobody anywhere has been able to uncover any photos or documents that ‘outs’ them as being human.  Isn’t that strange?  One would have expected that a graduation picture, a birth certificate or even a mug-shot photo might be unearthed.  Now, this dearth of evidence doesn’t necessarily mean that Joe and Israel are actually God and Satan; the absence of evidence is not necessarily evidence of an absence.  But it does add circumstantial credibility to their claims.

“But even if they’re both liars, they’ve raised an interesting question: How do we, as mere humans, differentiate good from evil?  We’re deceived by leftwing evildoers with such regularity—and most of the time, the lefties aren’t even that smart!  Yes, you and I can smell ‘em out, but over 50 percent of our countrymen cannot.  So think about it: If we can’t even fend ourselves from the deceivers of earthly origins, what prayer do we have against deceivers of unearthly origins?

“And I’m not trying to be an alarmist here, but let’s face facts: Every election day, millions of Americans vote for anti-Christian secular progressives.  And I’m guesstimating that the S.P.s’ median age is, oh, maybe 50 to 70.  You compare this to Satan himself, who’s spent thousands of centuries perfecting his message, and you see that we’re facing a serious experience-gap.  Realistically, what hope do we have?

“To answer these questions, as well as many more, let us welcome Miss Margaret Magdala—the apostle of the, uh, entity she believes is the one true Second Coming, Joe.  Margaret, I’m glad you could join us.”

Margaret the Apostle grinned like the Cheshire Cat.  “Thank you, Nathan!  I’ve listened to your show for so many years now—I’m a super-big fan!”

Konrad motioned for the engineer to lower Margaret’s microphone while scanning through his notepad.  “And we’re delighted as well, Miss Magdala.  My opening question for you relates to my monologue.  Assuming that Joe and Israel are both of supernatural origins, how do you know that you’re following the Son of God and not Satan?  As you may or may not be aware, according to the latest poll numbers, a greater percentage of Americans believe that Israel is the Second Coming, and by a wide margin—a whopping 17 percent.  What do these numbers say to you?”

Margaret was unfamiliar with those statistics.  Still, she knew her heart and she knew her faith.  “They say I need to become more forceful at communicating Joe’s message to the world—and appearing on influential programs such as yours is an important first step.  Joe’s message is perfect, even if my presentation, evidently, is not.  You know Nathan, there’s a reason why Christianity caught on like a wildfire and spread throughout Europe, the Americas and the entire world, becoming the dominant religion on the planet.  Islam, Judaism, Hinduism… none of them comes even close to matching the success of Christianity.  And it’s not a coincidence that the greatest scientific achievements of the past 500 years can all be traced to Christian nations.  Christianity succeeds because Christianity is right!  Eventually, Joe’s message will prevail because his message is truth.  Lies are momentary; truth stands forev—”

Konrad jackhammered his gold-plated pen on his desk, distracting Margaret.

“Yes, yes,” interrupted the radio icon. “Of this we are not in conflict. I’m not one of those pandering relativists who preach that all civilizations are of equal moral worth, for I believe in the superiority of the American way of life and our Christian system of values.  Take Islam, for example. That religion silences intellectual debate by labeling free-thinkers as heretics. As a result, I can’t think of one Muslim philosopher over the past thousand years who’s worth a damn. Can you?”

Before Margaret could answer, Konrad continued: “Now, I’m not saying that Islam is of no moral worth—you Arab listeners, don’t take my statements out of context and start blowing stuff up again.  Sheesh.  You people have to learn how to accept criticism better.   I’m simply pointing out that the Islamic faith, as interpreted by its radicalized Imams, does not promote rigorous debate in an open marketplace of ideas. As a result, its philosophy has stagnated, with the majority of Arabs lacking flush-toilets and a military that makes France look like a nation of Rambos.”

Now Konrad was really rolling: “My friends, I’ve noticed that these Arabs like to declare ‘Holy Wars’ against America, Israel and Europe.  They never actually win these Holy Wars; they just like declaring Holy Wars.  Can you remember the last time an Arab nation actually defeated a Christian—or even a Jewish—nation?  I think you have to go all the way back to the Ottoman Empire—a kingdom so pathetic, its name is used to describe furniture we rest our feet atop!  Worst kingdom ever! But while we’re not in conflict on this point, fair-minded individuals can differ on matters of faith, and in my humble opinion, therein rests the key dilemma between Joe and Israel: How do we know which of the two is speaking the word of God and which is deceiving mankind? As Shakespeare wrote long ago, ‘Even the Devil can quote Scripture for his own purpose.’”

A bright bulb herself, Margaret decided that the best way to handle Konrad and convince his audience of her message’s authenticity was to speak a bit bolder than the host—for while the meek might inherit the earth, only the assertive wins control of the microphone.  (But just to hedge her bets, she allowed her top blouse button to slip out of place.)

A nationally-recognized marketing expert, Scott Pinsker has worked with a vast array of sports stars, Grammy-winners and entertainment icons, managing everything from crisis communications to film properties.  His analysis of publicity trends has been showcased multiple times on FOXNews.com, where he occasionally contributes as a marketing expert.

One Response to Book Tour: The Second Coming: A Love Story