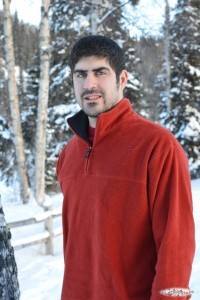 Joshua began crafting the world for his dark fantasy series, Thrice Nine Legends, in 1999. Melkorka, the first book of the series, was published in 2015. The sequel, Dyndaer, will be released in January 2016. He is also the author of the A Midwinter Sellsword and Gladiators and Thieves in the Hawkhurst Saga. His story, Grimsdalr, is inspired by the tale of Beowulf. Joshua currently lives in Alaska with his wife and children.

Kaelandur was forged by the Highborn to slay one of their own, Nedezhda Mager. As their slave, Branimir Baran never thought to question his cruel masters until he is forced to take part in the execution. His actions begin a chain of events that will lead him to confront demons, cannibals, and himself as he is forced to question his own morality and the true meaning of good and evil.

Branimir is a slave to the mighty Highborn. Unwittingly, his masters forge a copper dagger capable of destroying the Ash Tree. Drawn along on the quest to remedy the mistake of his masters, Branimir becomes the most unlikely of heroes in an inimical world of magic and mayhem.

A sellsword is lured into the daunting political games within Hawkhurst. How many people will he have to kill to keep his own secrets hidden and to escape the city?

The second installment in the Hawkhurst Saga. A bastard child of a noble family escaped the subterranean city after being enslaved to the gladiator pits. After being lured into the daunting political games, will he ever find his freedom again?

In the spirit of the epic poem, Beowulf, a renowned hero travels across the whale-road to defeat a monster that plagues the land of Croune.

Tell us a little about yourself.

I am originally from Kansas and I currently live in Alaska with my wife and children. I started writing snippets of fantasy and horror around the age of nine, had a collection of poetry and short stories by fifteen, and had completed my first fantasy novel at seventeen. Recently, I have published a couple of books and started my own small press, Crimson Edge Publishing Company.

How many books have you written? I have recently published Melkorka in January 2015, the first book in the The Kaelandur Series, within the universe of Thrice Nine Legends. I am extremely excited about this novel and have received some great reviews. I also published A Midwinter Sellsword, Grimsdalr, and Gladiators and Thieves. I have several WIPs, including the sequel to Melkorka, titled Dyndaer. I am also co-writing another novel within Thrice Nine Legends called Anaerfell, to be released October 2015.What genre do you enjoy writing the most?

I enjoy writing fantasy or dark fantasy more than anything. I have some snippets laying around that are science fiction and dystopian, but I am most comfortable in the fantasy realm.

Tell us a bit more about your book?

For the sake of brevity, I will tell you about Melkorka. It is about a slave, named Branimir, 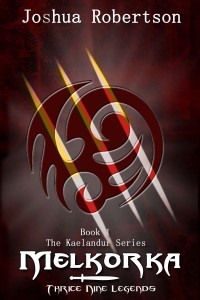 who serves the mighty Highborn. Unwittingly, his masters forge a copper dagger capable of destroying the Ash Tree. Drawn along on the quest to remedy the mistake of his masters, Branimir becomes the most unlikely of heroes in an inimical world of magic and mayhem.

What inspired you to write this book?

The sequel to Melkorka, Dyndaer, has been written and rewritten repeatedly over the past decade. In ten years, I have scrapped Dyndaer many times in frustration that I could get the story exactly how I wanted it. Then, I woke up one morning in December 2013 from an inspirational dream that presented the core to the story. Lo and behold, Melkorka was created, giving birth to the rest of the story.

How did you come up with the title of your book?

Melkorka is the name of the castle that serves as the start of this tale. The word itself has some meaning, found in the thirteenth century Icelandic tale, Laxdaela saga. Laxdaela saga makes mention of Melkorka an Irish princess that was taken as a slave and pretended to be mute, hiding her identity, only to reveal later that there was more to her than what was on the surface. In many ways, Melkorka is a story that echoes the complexity in legend, suggesting to the reader that there is more than what appears on the surface. It seemed fitting for the first book in The Kaelandur Series.

Tell us a little bit about your cover art. Who designed it? Why did you go with that particular image/artwork?

Winter Bayne is the talented graphic designer that completed the cover for Melkorka (and my other novels). The emblem on the front of the cover for Melkorka is the mirror image of the symbol of the Sun God in Melkorka. This is the most revered god during the events of the novel. I wanted a simple image for the theme. I could not be more pleased with the final outcome.

Do you have any strange writing habits?

I will always drink one cup of coffee before starting to write, and I have a fresh pot brewed and at the ready for once I start.

You’re not alone in that. *laughing*

I generally write in the late evening to early morning (between 2000 and 0200). There are several songs that I like to play depending on what scene is unfolding: romantic, suspense, or suspicious. And, I have a rule that I don’t get rewarded with chips and salsa until I have completed a minimum of 1000 words.

Are you a plotter or do you write by the seat of your pants?

I will usually write the first two or three chapters and then I plot the rest of the story. I am a believer in plotting a story to assure that it has the elements of a complete story. I have read too many novels with plot holes or that are rushed at the end to wrap up loose ends.

What book do you wish you could have written?

The entire series of the Game of Thrones, actually. I have never read them (yet) but I do watch the television series. I have found that the themes in the story are similar to the ones in my own books…and I started my stories over ten years ago.

How important are names to you in your books? Do you choose the names based on liking the way it sounds or the meaning?

When I first start writing, I do not pay much attention to the names. However, once finished, I focus heavily on the names to build on the culture and flavor of the story. I like to have my names have similar sounds and a sense of culture behind them. It would be bizarre to have a Bilbo Baggins, a Jon Snow, and a Candace Everdeen in the same story. Names have to fit the time, place, and culture of the story – and when they break the rules, there should be a logical reason behind it (e.g. a vampire named Vladimir is living in the modern century).

Have you always enjoyed writing?

Absolutely. In high school, I was considered the most likely to become a published writer. I regret it has taken me almost ten years to seriously start pursuing the career. Regardless, it is something I will continue to do until the day I die. I will never retire from writing.

What is your favorite snack food?

I have several, especially when I write: coffee, chips and salsa, and sour patch kids.

If you had a supernatural power, what would it be?

My general answer to this question is super healing powers. I always thought that was by far the best superpower that anybody could come across. Then, I had another author suggest the manipulation of time. Thus, I have to recant the prior and choose the latter.

Where is one place you want to visit that you haven’t been before?

Czechoslovakia. I want to simply roam through the hills and drink wine.