Here at Proof Positive, we’re huge fans of books that have something for everyone. Susan Mills Wilson’s latest book, Her Lying Eyes, has it all: suspense, romance, mystery, murder, politics, and lies – lots of them. If you’re looking for a book you can convince all your friends to read before you get together for lunch, you’ve found “the one”. Something tells me a lot of book clubs will be starting up once you discover this book. Be sure to check it out, but first read on to find out more about Wilson herself and how she develops characters and storylines that will have you reading far past your bedtime.

How long did it take you to plan Her Lying Eyes before you began writing it?

I worked out the plot in my head about two months before I began writing a single word. I knew which direction I wanted to take it and who would be the main characters to carry the plot. Crazy as it sounds, I feel it’s important for me to develop a relationship with my imaginary characters so I will know how they will interact with each other and how they will react to situations, good or bad.

I also like to write romantic short stories. They’re always feel-good reads where the boy gets the girl or vice versa. Also, every Christmas, I write a holiday short story that I send to family and friends just for the fun of it. I write a weekly blog on my website that satisfies the nonfiction writer in me.

Many romantic suspense books are cozy, but I like to write gritty. However, some topics are off limits for me. I don’t write about torture, child abuse, diabolical killers or erotica. What really makes my work stand apart is the complex relationships of characters where they are torn between decisions that could have dire consequences. Everyone, including my main characters, have flaws that sometimes take them over the edge. For example, Kirkus Review said this about my debut novel, GOOD GONE BAD: Like the best noir, this story puts its characters through an emotional wringer and makes the reader feel their desperation, too.

None of the characters are based on real people; however, they are a composite of certain traits I have seen in others. A minor character, newspaper editor Stu Blackmon, talks nonstop, and I feel we all know someone like that. In this novel, the head of the Reynolds empire is a rich, powerful person who abuses his wealth and influence, similar to real people we all read about in the news. Main character Jamison Jackson is an investigative reporter, a career I always wanted to have. I guess I’m living out that dream through her.

My first novel (not yet published) was inspired by a Toby Keith song, “That’s My House.” Most of my inspiration comes from real life events that readers can identify with. My next novel, MELTDOWN, was inspired because I was at a concert in a park and saw a church tower across the street. I thought, “Wouldn’t that be a great place for a sniper to take shots at a crowd?” What can I say? Suspense writers are twisted.

One of the most important things I have done, which I recommend to other writers, is to get involved in a critique group. I am coordinator of The Mystery Critique Group in my town. Their advice has been invaluable to me. I listened to what they said and accordingly made changes in writing HER LYING EYES.

The outline for my story is in my head. Sometimes I will mark up a calendar to get a timeline of when the action is to be played out. I write mock interviews with characters so I can get inside their heads and write from their point of view. I also write a personal profile of all main characters that includes their weaknesses, strength, goals, habits, how they dress, and even what their favorite drink is.

The subplot of this book involves a toxic spill of chemicals, either accidental or intentional. I had to read a lot of articles and documentation to get it right. Also, I have attended three police citizens academies so that I have a clear understanding of police procedures and investigations. If there are mistakes with that part of the story, it’s on me and not the officers I consulted with.

Yes, I read mostly suspenseful books, but not necessarily romantic suspense. I like a book that is a good page-turner. I enjoy movies that keep you on the edge of your seat. I sometimes visualize certain actors in the roles of my characters.

If I could write anywhere, it would be somewhere on the coast. I love the Carolina coast because it’s close to home and I know it well. Of course, laying low in a bungalow on a Caribbean island doesn’t sound like a bad gig either.

Check out Her Lying Eyes:
Amazon 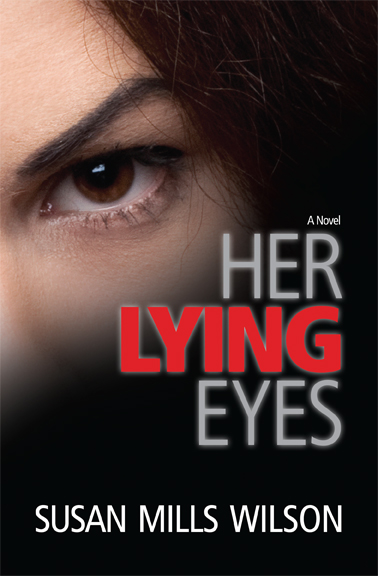