Joshua Robertson and J.C. Boyd’s’s Anaerfell comes out October 31, and we’ve got not one, not two, but three excerpts for you to enjoy! Not sure if this is the Halloween read you’re looking for? Just check out the blurb. One word: “skin-switchers”. 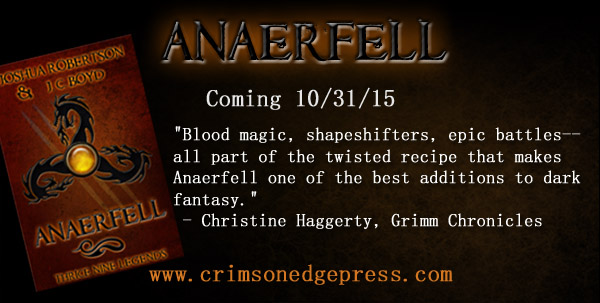 Drast, cunning but reckless, is on the hunt for admiration. Tyran, calculating but tactless,
is in search of affection. Bound by a friendship thicker than blood, the two brothers have been hardened by their father’s ambitions. Drast and Tyran are forced to set aside their own hopes and dreams during their struggle to fulfill their father’s desire for immortality. The two will face skin-switchers and dragons, ultimately leading to a final clash with Wolos, God of the Dead.

Erzebeth convulsed. Her fur and skin shedding away while she wheeled about on the ground in agony. The bones readjusted and organs reset from beast to human. Where a beast had stood was now the naked figure of Erzebeth. Cuts and scratches patterned her body, but none were fatal.

Tyran had no place for modesty. The Vucari woman, within the privacy of the ice dome, struggled to her feet. Again, her dark eyes met his own, filled with compassion.

“You need to be put down, young Red.” Her voice was calm as her feet crossed in front of one another, closing the distance between them. “Your power is greater than any I have seen before, even from the Anshedar.”

“What?” Tyran said, forehead wrinkled with confusion. He had never heard of the race before, whether beast or otherwise.

“You are like a rabid dog, young Red. You are the perfect companion, loyal, and possibly even loving somewhere deep inside,” Erzebeth bit her lip. Her breasts, barely covered by her dark hair, touched the front of his chest. She halted her feet. “But, you are tainted by a disease that is stronger than the goodness in you. You cannot be left to live in this world, or you will corrupt every living thing around you.”

Tyran tilted his chin, lips parting. His free hand touched her pale skin, as whitish as the ice fortress that veiled this moment.

“You would taint me, young Red.” She stepped up on her tiptoes. “As with the rabid dog, you need to be put down.” 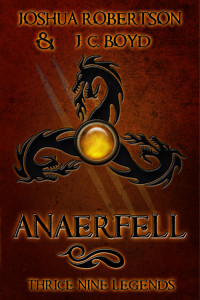 He grabbed her by the back of the neck, and pulled her to him. He kissed her with more force than he had ever kissed any woman.

She grabbed his shoulders and returned the embrace, her tongue touching his lips. Her body was far warmer than his own, as if it were heated by the darkness.

He did not know what he was doing in this moment. It may have likely been the first time that his mind was clear from thought, acting without thinking. Though, in time, he may consider that when his death was nigh, he found that this was something he wanted to do before death found him.

The crashing against the ice pulled him from the moment. Tyran pulled back, moving the Vucari’s hair from her cheek. “You won’t kill me, Erzebeth.”

“No,” she breathed. Her hands fell to his chest. “But, it still needs to be done.”

His brother looked at his hands, now covered by great warm mittens. “Drast?”

“How are they going to remember us?”

Tyran shrugged his heavy shoulders. “The Stuhia. The Vucari. The world, I suppose.”

“Does it always come down to glory?”

Drast snorted. “Yes. If we fail we will not be remembered. It must come to glory.”

Tyran shook his head. “But is what we are doing glorious?”

Tyran stopped and turned. “But if we are wrong. If killing Wolos is somehow an evil act. Or, if we fail and we are remembered because of our tyrant father—”

“Tyran, you are overthinking this. Why do you even care how people will remember you to begin with? It will not matter. We will either succeed, in which case we are allowed to tell whatever tale of our victory we choose, or we fail and are dead and it doesn’t matter. Regardless, people will remember us for the height of our lives, when we faced a god.”

“I want to believe that I did something right for this world before I died.”

The room still whirled from last night. He tried to close his eyes to keep his stomach from doing the same, but closing his eyes actually made it worse. Drast was somewhat surprised that the drink was still affecting him like this. He had been having more than his fill for—he did not know how long. How long ago did Tyran leave? His mind was too foggy to remember. And Walstan was gone, too.

Vaguely, Drast saw that the sky was just turning blue with the rising sun. At least, he was fairly certain it was sunrise. None of the hues of sunset had begun to color the sky. 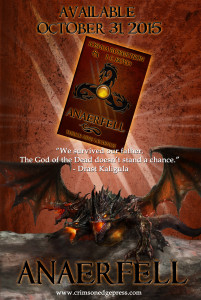 He turned his head to the entrance into his chambers and pulled himself more upright to lean against the nightstand beside his bed. One of the serving women stood just inside of his room. “What?”

“The Arkhon wishes to speak with you.”

He was not certain what string of curses came from his lips, but the maid blanched and her face grew pink, almost to the color of her hair. The room swirled again while she spoke.

“I said, Ser Drast, the Arkhon instructed me to remain with you until you came to meet with him.” Her voice quivered.

She was right to fear him. Her voice was fuzzy, just like everything. But, he knew he had not been particularly kind to any of the servants of late. He had managed to avoid his father by effectively frightening the servants. Their fear, combined with late nights, ale, and sleeping until the sun set, had allowed him to avoid talking with anyone who did not enjoy a mug or two.

A few of the servants had initially joined him in drinking. He loosely recalled this maid among them. Ura? Mura? Lura?

“Kura,” he finally muttered. He had been a little too handsy and she had since avoided him like—he could not clearly comprise a simile. Like. Like? Like the moon avoided the sun? Good enough.

Drast spat at the chamber pot. He was fairly certain he missed. “Well, come on in, Kura.” He belched. “I know how we can pass the time.”

J.C. lives in the Midwest with his wife and two dogs. He is currently pursuing his M.A. in English Literature while continuing to craft his own dark fantasy world.  Before he had completed junior high, J.C. had received his first box set of Dungeons & Dragons and devoured the J.R.R. Tolkien’s The Lord of the Rings. He has had a passion for the fantasy genre ever since.