Posted on November 6, 2020 by Christie Stratos

Six lives, one city. In Kevin Zdrill‘s latest book, The Jungle Room, almost everyone is trying to find a way out of their lives. Some want to return to their families, some want to start fresh, and some are finding the seedy underbelly of LA very fruitful. When a disturbing sequence of events causes their lives to collide, the consequences are extreme and dire.

What extremes would you go to for the chance to achieve your dream life? 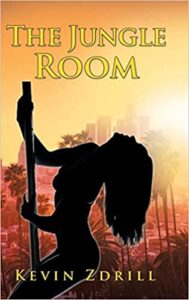 girlfriend, Alejandra—if he doesn’t get caught by the cops first.

Alejandra’s probation-jumping new roommate, Megan, is thrilled to begin a career as a stripper at The Jungle Room. Her new mentor, long-time dancer and drug addict Tyrianne, promises to bring her to the top of her profession with cash and partying beyond her wildest dreams. But when the drugs and booze get out of control, there are harsh consequences to pay.

Tommy has discovered that having a regular desk job isn’t quite as creative as playing out the fantasies of middle-aged businessmen—unless they don’t pay up.

Kirk has been abused one too many times by boyfriends promising him the world, and now he’s stuck in a job he despises with a boss he loathes even more. Can he escape before his burgeoning paranoia leaks too far into his day job?

Experience L.A.’s seedy underbelly, where all roads lead to deceit, betrayal, or murder!