Book Launch: Snatched from the Foster System, Alone in a Magical Kingdom

Coraline Fray’s escape from foster care is about to turn into a fight for her life.

After Cora’s utter clumsiness lands her in a strange world, she’s immediately hauled off to 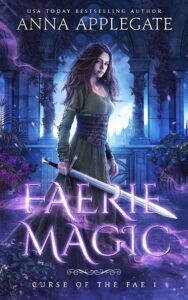 jail by a Fae guard. Now the freedom that had been so close is a distant memory…because humans who learn of Faerie can never go back.

Imprisoned as an energy source for the Unseelie Kingdom, Cora now serves the heir to the throne: Noah Driscoll. And although Prince Noah disagrees with the practice of imprisoning humans for energy-feeding purposes, that’s a secret the future Unseelie King needs kept quiet.

Which means even if he’s against it, he needs Cora to pretend he’s feeding, and she needs to keep up the ruse, too. Because if Noah isn’t feeding on her, she’ll be assigned to another Fae who will.

And yet, somehow she’s found herself loyal to these monsters the minute they’re threatened, and starting to fall for the Prince of the Unseelie himself…two mistakes that are about to cost her what little she has left.

One-click now to escape to Faerie on this new, magical adventure!