Posted on December 14, 2021 by Christie Stratos

What makes a good book? 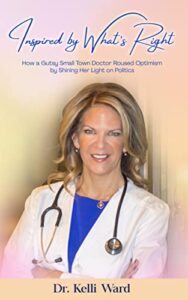 the face of great odds and turns misfortune into assets. And if it is true, it’s all the more captivating.

This is your opportunity to learn the back story of a little girl who left the hills of West Virginia to become Chairwoman of the Republican Party of Arizona.

In Inspired by What’s Right, you will get the first-hand account of how Dr. Kelli Ward was inspired and then acted to take on the challenges that she felt stood in her way. You will have a front row seat to see how Kelli: