Posted on February 2, 2021 by Christie Stratos

FROM NEW YORK TIMES and USA TODAY BESTSELLING AUTHOR of THE MEMORY BOX.

It’s New Year’s Eve. Shae Wilmont, the adored celebrity host of IShop—a popular shopping site—is ready to reclaim her life. Her stalker has been caught. But en route to a party, a harrowing encounter lands her in the wrong place at the wrong time. She panics. And trusts her gut. It’s a devastating mistake.

Only one person knows where she ends up. It’s where no one can find her.

Shae’s stunned fans quickly galvanize to track her down. 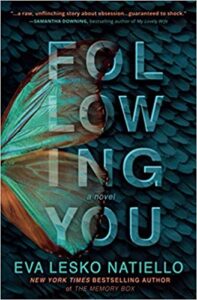 Yet the charismatic Shae they know, who delivers digital intimacy to viewers who’ll buy anything she sells, off camera is an enigma—private and strangely insecure—unable to let anyone get close. When startling personal secrets are exposed during the investigation, the paradox of Shae begins to unravel.

In this dark psychological suspense, the lives of three strangers collide irreversibly. Honey, a displaced Southern girl with a painful past, is fiercely protective of her friends at the expense of her own safety, derailing her new life in California. Creepy Lawrence, a Detective Bureau fast-tracker with a penchant for latex gloves and a perverse obsession with Shae. And Shae, with millions of fake friends but hardly a real one.

All three are hiding something, but only two of them are lying.

This suspenseful page-turner bares our assumptions of strangers. Who we believe without judgment and who we judge without believing. A story about privilege, family, identity, the need for belonging and the destruction caused by secrets.

How can you trust your instincts when they turn out to be wrong?

Following You is perfect for fans of Something She’s Not Telling Us and The Perfect Stranger.