Posted on September 24, 2021 by Christie Stratos

A third of all proceeds generated from A Nickel and A Trinket go to charities fighting against human trafficking.

A nickel and a trinket…small price for a second chance at life.

Stefan works street corners around town, giving strangers the gift of their Time of Death in 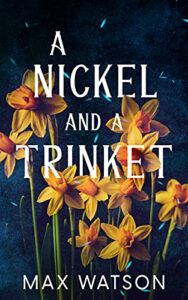 exchange for a nickel and a trinket. He’s unknowingly exploited by his family, which pushes him into a fame he never wanted, and all the while they’re keeping secrets from him. Devastated by a sudden death, his world is thrown into turmoil, kicking off an unstoppable downward spiral, only worsened by his now crippling anthropophobia. He flees from the spotlight, causing unforeseen and unpredictable public chaos. As he searches desperately for Mona, his only remaining friend, he becomes the prime suspect in a missing persons investigation.

Mona’s mother forced her to work the streets from a young age. Now years later, Mona fights to free as many lives as she can from the fate she suffered as a child. But a guilt that’s quietly eating away at her is brought to light when Stefan, the alluring boy from her past, comes back. When a dangerous hooded figure has his sights set on destroying all her efforts, Desdamona must rely on the one person she’s afraid to get close to or watch as everything she’s built is set aflame.

A Nickel and A Trinket explores humanity’s strange magnetism with death, the struggle to outgrow the shadows of the past, and the magic that brings together a patchwork of people to form a family.

Read A Nickel and A Trinket