We’re thrilled to share with you a brand new voice in urban paranormal, Jaya Moon, with her debut book, Awoken, the first in The Ascension of Meghan May series. Get swept away in an urban paranormal world of sexy animal shifters, dangerous angels, and a war that’s spilling into the human world.

Angels and shifters like you’ve never seen them before.

I moved to the city because I thought it was safer—the bigger the city, the more angels. 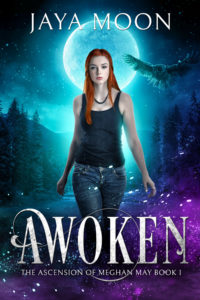 Who knew saving an owl would mean I’d be hunted by the High Angel and Warden of the State? That owl I saved…he wasn’t any ordinary owl. I’ve been labelled a shifter sympathizer, and we end up as dead as shifters.

A shifter believes he owes me his life. With help from his friends—a human and a surly angel—he’s vowed to get me out of this mess I’m in. After that, I can return to my old life.

The plan is simple. Life, however, isn’t.

Awoken is Book 1 in The Ascension of Meghan May series. It is an urban paranormal, slow to medium burn, reverse harem “why choose” story intended for a mature audiences (18+ years). It contains strong language and sexual situations.

Jaya Moon lives on the south coast of Australia with her husband and son. She digs holes by day and writes at night and is tempted to tell you she’s a grave digger (that sounds far more interesting than her real day job).

You can connect with Jaya at her Facebook group The Lunar Lounge.