First of all, come to Jason Greensides’ relaunch party if you’re reading this on September 30! It’s on Facebook and will include author takeovers, book giveaways, and lots of fun. Click here to check it out and join!

We are excited to announce the relaunch of Jason’s debut novel and help him celebrate, especially with his new cover that drips ambiance. His writing style is engaging, his story entrancing, and he’s passionate about books. What more can you ask of any author? He’s also got another book in the works, but that’s a secret…

On with the interview! 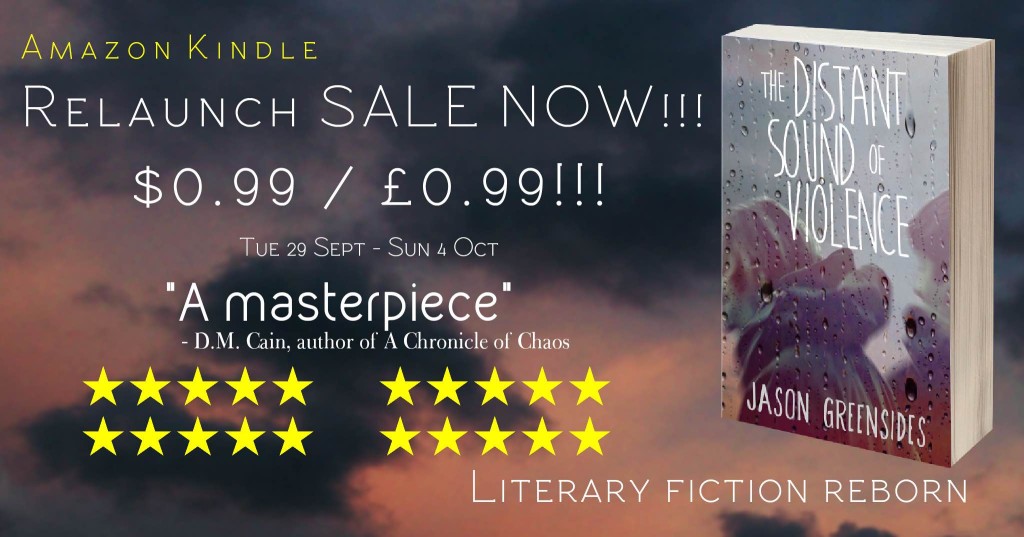 Question: The Distant Sound of Violence is your debut book. Love the name, and congratulations! How long did it take you to plan it before you began writing it?

Answer: In a sense I’ve been planning the book my whole life, I just didn’t know it. In terms of sitting down and compiling all the research notes, character and story ideas, themes etc., that took three months.

Question: The description of The Distant Sound of Violence sounds like the book focuses on the journey of the characters rather than their destination, which is intriguing. Would you say this was a conscious literary decision or just the way it ended up going?

Answer: This was a conscious decision. I love literary fiction, and I’d always set out to write a novel which focuses on character, theme and emotion, rather than plot. Not to say that the plot wasn’t there, in fact for the first half of the novel I wanted a driving plot to carry me through the second half, which does become more literary, focusing on the consequences of Nathan’s life decisions, particularly his homelessness, and the way his decisions overshadowed his life. I would say I write commercial literary/contemporary fiction. I know the character’s internal life is the thing most important to me, however, I still want the text to be transparent – I want the reader to forget they are reading.

Question: As a work of literary fiction, do you use other art (i.e. books, movies, music, etc.) in your book, whether as references or motifs?

Answer: I do at the research stage, after that I try to forget any of those other things exist. 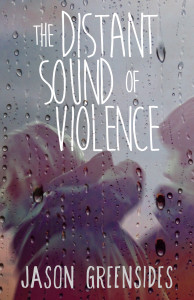 Martin Amis is one of my favourite authors, and when I write I have a strict ‘no reading Amis policy’ because I’ll just end up emulating his style. In general, of course, I’m influenced by my favourite films and books, as I’m sure most writers are. Important films to me are the New Hollywood films of the 70s, as many of them are concerned with characters living on the edge of society (e.g. Taxi Driver, Badlands, The Conversation), as well as more recent indie or character-driven dramas, such as Monster, One Hour Photo, Les Amants du Pont-Neuf. In terms of fiction, authors such as Joyce Carol Oates, Paul Auster and Michel Faber are in influence, particularly in terms of style and the types of characters they write about – again, outsiders.

Question: What do you think makes your work stand apart from other works in your genre?

Answer: The Structure. The Distant Sound of Violence is a novel of two halves: the first is fast-paced and easily accessible, almost putting it in the Young Adult genre. The second half, however, is slower, brooding, more overtly literary. You might say in the first half I’m really trying to get the reader to enjoy it and get caught up in the drama, and the second half is like, Hey, you came this far, please indulge me a little here… Also, the first half is set over a few months, the second half spans seventeen years.

Question: What inspires you to write? Music? Other books? Real life events? Just an incredible imagination?

Answer: It’s hard to say what inspires me to write, because if I wasn’t writing I’d be doing something else creative. But it’s mainly the books I’ve read, those few key books you get lost in, the ones that keep you up at night, that obsess you in your working day. I’d love to write that kind of book, if possible.

Question: Do you plan your writing out with outlines, character development exercises, and other pre-writing activities? Or do you just write as it comes to you?

Answer: I ask myself key questions about the characters – What does the character want? What do they actually need? What is their main conflict? I’ll do a few sketches with them that don’t encroach on the story I’m about to tell, do a little back story, and a few other details. I’ll visit locations if possible and take photos. In terms of plot, I’ll come up with a vague outline, with a few key events I know I need to navigate to. I certainly don’t like to know all the answers before going in, I want to discover something myself, something I didn’t know was there or was going to happen. That actually happened quite a few times during writing The Distant Sound of Violence, and it’s one of the things I really loved about writing it. There were times when I’d slap my head and actually say out loud, Oh my God! I had no idea that was going to happen! Because as the writer if you don’t know what’s going to happen, then it’s more likely the reader won’t either. On the other hand, my second novel, which I’m still on the first draft of, has a stronger mystery element from page one, so I need more detail about where I’m going this time. It’s safer. You need an idea of where you’re going, generally; research is like packing for an incredibly long journey, one where you should take a map. How detailed that map is is where all writers differ.

Question: If you could write anywhere in the world – in a fictional or nonfiction place – where would you write?

Answer: It depends on the story. At the moment I’m writing London-based novels, so where I am now in west London is fine. I can write anywhere, and have. I’ve been standing on the train platform waiting for the tube after work, pen and A4 paper in hand, scribbling away, getting weird looks from other people. Strangely a lot of background noise like crowds of people and traffic can work for me; silence can be louder than any of those things. Having said all that, the Arctic tundra appeals. 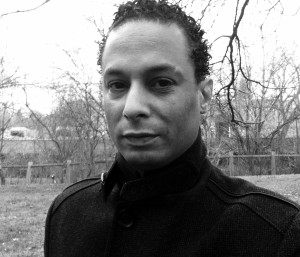 Jason Greensides has a degree in Video Production and Film Studies and has made several short films, two of which have been broadcast on television, but it’s writing fiction he always returns to.

He’s interested in ‘outsider’ types, those operating on the fringes of society. This inspired him to write his first novel The Distant Sound of Violence. It’s about a group of kids, one in particular, Nathan Dawes, whose philosophical obsessions and criminal connections have all but made him an outcast at school.

Jason is now working on his second novel, another coming-of-age mystery, but on coffee breaks he tweets and blogs about the mysteries of writing, life and the cosmos.