Posted on December 12, 2020 by Christie Stratos

Discover the truth about the crash that never should have happened.

In 1974, Pan American Flight 806 was hoping to land safely in Pago Pago, Samoa but instead plummeted at 140 miles per hour into the jungle floor. The 101 passengers and 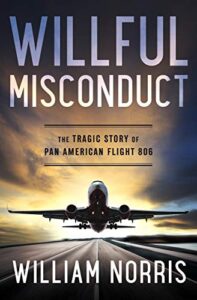 crew members all survived this devastating crash. Unfortunately, only four of them escaped the wreckage before the ensuing fire that followed and lived to tell their story. After the disaster, Pan American was found guilty of “willful misconduct” after the longest and most expensive trial in aviation history.

William Norris sets out to discover the truth about the controversies surrounding the accident. What caused the crash, and what prevented the 97 passengers from escaping the aircraft with their lives? Among these questions, Norris discovers more answers to other mysteries about this devastating event and its trial along the way.

It is a triumph of investigative journalism by a man whose outrage grew as he followed the trail of evidence, dug beneath the cover-ups, and personally came to know most of those involved.