There’s something very gripping about a book that depicts frightening real-life situations that are relevant right now. Susan Mills Wilson’s Meltdown shows two sides of the U.S. soldier coin, sides that should always be at the front of our attention. It’s even more wonderful when this kind of book can fit in a character you’re happy to reunite with from a previous book, in this case, Her Lying Eyes.

Without further ado, we’ll let Susan tell you all the research and inspiration that went into her awesome suspense novel.

Meltdown is a book with a couple of serious psychological conditions and issues. Did you spend a lot of time researching these conditions? What kind of research did you do? Books, interviews?

I had several casual conversations with a Marine sergeant who was deployed five times to Kosovo, Iraq and Afghanistan as a specialist in Explosive Ordinance Devices. I found it very enlightening to “pick the brain” of someone who has actually been there. I also read several books, both fiction and non-fiction, about the US military’s role in Afghanistan and Iraq. I watched documentaries and movies that not only depicted the war but also addressed the issues of PTSD and traumatic brain injury. To authenticate the personality of the active shooter, Jared Bolten, I tried to learn as much as possible about similar nefarious killers such as Eric Rudolph and Timothy McVeigh. I wanted to know what motivated them to do horrible acts that caused multiple casualties.

What inspired you to write a thriller revolving around two men who served in Afghanistan? Do you personally know anyone who served?

The sergeant I mentioned above is my nephew. I know several veterans who served either in the Middle East or in Vietnam. I have always been interested in how war affected them and others. The novel addresses how the war experience impacted the lives of two very different men. Army sniper, Jared Bolten, comes back uninjured but fueled by anger. On the other hand, Sam Briggs, returns as a disillusioned, severely injured man, both physically and emotionally. Their lives are changed forever. Soldiers are trained to kill the enemy, but unfortunately, some implement that training when sound reasoning goes awry, as in this story.

If I am making a statement, it is this: War changes people. No one comes back from war 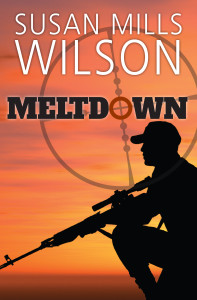 the same person as before they left. In my opinion, it is not so much about the circumstances of someone’s life but more about the way they allow the circumstances to affect their lives. Of course, how a soldier deals with trauma may have a lot to do with his or her life before going to war. In the case of Bolten, he grew up fueled by hate and intolerance. When he thinks he was unfairly treated by his military superiors, he decides to seek revenge on innocent civilians.

Do you think it’s important to include issues relevant to major current events in fiction novels? What do you think it accomplishes?

I think readers like to delve into the middle of real life events to know the human story behind it, even if they are personally unaffected. A story like this gives them an up-close view of a political and military conflict thousands of miles away. It makes it hard for anyone to stay neutral or indifferent once aware of lasting effects, not just to the landscape but to individual lives.

It was great to see that Meltdown still has Homicide Detective Chris Lagoni as a main character. Do you plan on featuring him in future books?

Detective Lagoni was one of readers’ favorite characters in HER LYING EYES. If I get similar feedback from MELTDOWN, I will definitely bring him back in a future project. I enjoy writing about him because he is a complicated man. He is good at his job, but impatient, sarcastic, and quick tempered. The sexual tension heats up whenever he is in the presence of a beautiful, sexy woman like Megan Moore in MELTDOWN. I think men can relate, and women can swoon over this guy.

Did you consult with any law enforcement officers to get a feel for the gripping shooting scene in the beginning of the book?

I met with two police officers on a SWAT team who are trained snipers. They answered my questions related to the sniper rifle and the technical logistics of shooting from a tower from a 300-yard range. As a graduate of three police citizens academies, I have learned many aspects of law enforcement. The training of officers is never ending. We owe these men and women our gratitude since they put their lives at risk every single day. That is why I dedicated my novel to those who have lost their lives in the line of duty whether as a soldier or as a law enforcement officer.

If you’re in the Charlotte, North Carolina area, come have some pizza with Susan July 27!