Book Launch: Are these superpowered teenagers heroes, villains, or liars?

Posted on December 3, 2022 by Christie Stratos

After saving their hometown from a rampaging monster, 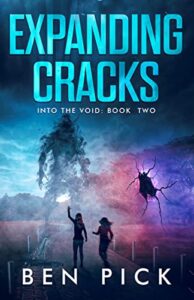 Rachel, Tracy, and Derek are
wary of the extra attention. Some praise them, others fear them, while many think the fight was an elaborate hoax. Buried under mountains of schoolwork, they’re failing to find the balance in their lives.

Cracks to the void continue to open, allowing more destructive monsters to breach their world.

Can they stop these otherworldly attacks and fix the devastation they caused or will they be revealed to be fake heroes as their world crumbles?

Read the second book in the Into The Void series