Lily Hammer‘s second short story is now available! “The Remnant” picks up from the end of “The Price“, and Hagador is immediately in a dangerous situation. Completely alone, none the wiser about Fewry, and wanted for heresy, Hagador can’t afford to take any chances with danger—it’s just that danger is intent on finding him.

The One-Horned Heretic series continues as Hagador embarks on the harsh journey west, running from the guilt of what he’s done and from a realm that wants him dead for it.

Hagador has no choice. He must get to the The Void, a safe haven in the wild and 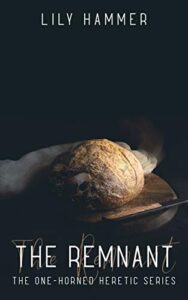 unfamiliar western reaches of Darkwerks where only those who have committed crimes against the Gods can seek asylum.

But he can’t do it alone. When Hagador runs into trouble in a border town, an unlikely ally reveals himself. This comes at the perfect time for the one-horned Ovis; the west is about to demonstrate how dangerous and unpredictable it can be.

“The Remnant” is the second installment of The One-Horned Heretic series. Part one, “The Price“, is available on Amazon.

Read the first short story in the One-Horned Heretic series