Posted on November 24, 2020 by Christie Stratos

Jessa Forest‘s The Slaughter Chronicles kicks off with Pulling Teeth and Other Stories, an anthology that reads like a novel. Follow Regina Slaughter through her young life as a werewolf who wants nothing more than to shift into wolf form and run under the moon—except she’s imprisoned by monster hunters who want to experiment on her. But this isn’t her first brush with danger. And it won’t be her last. At times visceral and at times light-hearted, Pulling Teeth and Other Stories is an exciting journey into a new paranormal world you’ll love!

Teenage Regina Slaughter finds out there are three sides to life: human, monster, and 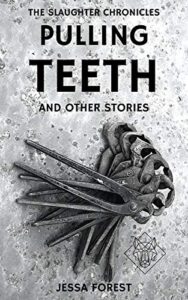 Restarting her life with an emotionally barren Void hunter for a teacher and a caring werewolf for an adopted father gives her a bright, shiny future. But her world didn’t start out so bright and shiny.

When little Regina unwillingly became a werewolf at the tender age of nine, she lost her whole family soon after. Her new life in a cage at the whim of HADES monster hunters’ experimentations is even worse than her old life.

Now on the monster side of life, Regina learns that there are no limits to the kind of monster humans can be.

Regina is saved by the Alpha of a werewolf pack, who was also once human…and also once a werewolf hunter himself. Joyfully accepted into the Alpha’s new pack–joyful on her side, not on all of theirs–Regina enters the perilous world of monster hunting to protect the world from actually evil monsters.

Although sometimes she ends up keeping them as pets.

Buckle your seatbelts, put on a helmet, and hold on tight as you join Regina Slaughter in this grimdark paranormal fantasy collection that features five stories, two mad scientists, and one wolf girl.

Read Pulling Teeth and Other Stories by Jessa Forest