Looking for a fantasy series to launch you into the new year? We had a fun chat with Louisa Lo, author of the Vengeance Demons series, one you’ll blow through in no time!

This is my first novella, and the second book in the series. Turns out it takes just as much planning, if not more, to write a shorter story. Since it’s a prequel, I already knew what needs to happen by the end of the book. So in essence I knew the beginning and the end, but not the middle of the story. That’s often what history is like—they tell you the fallout, but not the full story of what really happened to lead to it. It took me a few weeks of tinkering with the plot before I started writing because I wanted all the loose ends to tie together neatly.

Before Vengeance is part of the Vengeance Demons series, and it’s a prequel to Vengeance Be Mine. What inspired you to write a prequel? Did you plan to write one or did it just come to you?

It just came to me, actually. In Vengeance Be Mine the best friend of the main character is 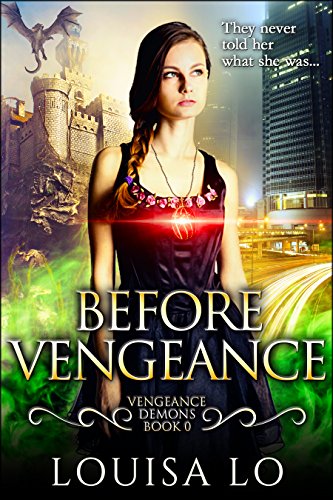 this sweet, gentle girl named Serafina. One day I just realized it’s the quiet ones you have to watch out for, so I started digging deeper into her backstory. The prequel ended up being quite instrumental for the latter books. I tried to reward the fans of the series by rewriting the opening of Vengeance Be Mine from the perspective of Serafina in Before Vengeance, and it’s a totally different scene once you know what’s in her head at the time. She wasn’t the damsel in distress; she was the one who saved everyone’s bacon.

I’m a geek girl at heart and fantasy speaks to me in a way that no other genres can. At least for now. I tried romance, but I knew something was wrong when I kept trying to throw a zombie in the love scene LOL!

Coming from a financial analysis background, I’m super diligent when it comes to plot points and story logic. I’m not the type who sends out endless red herrings and never gives anything back. On the other hand, I’m also very inventive and tend not to stick with the generic stuff. If vampires are hot, that’s when I wouldn’t touch vampires with a ten-foot pole. I hope that makes me stand out. Someone once said to me, “There’s an element of risk no matter what project you take on. You might as well do something you enjoy.” I agree with that sentiment wholeheartedly.

Is there anything in your life that inspired you to write the Cosmic Balance series, or was it purely from your imagination?

There are past events in my life that had inspired me to write this series. Let’s just say that I’d experienced my share of injustices, and writing about a fantasy world full of vengeance demons is a lot healthier than trying my hand at revenge myself.

Not in Before Vengeance. But in Vengeance Be Mine, the character of Fir was based on the

best friend of my father, this utterly fun-loving and flamboyant jokester who’s a perfect foil to my dad’s serious personality. I mean, when I was a kid, this guy, a grown-up, squeezed himself into a tiny little bumper car and raced my brother and me. What’s not to like?

Actually, *coughs self-consciously* I got my best ideas after reconciling my finances and washing dishes. There’s nothing like clearing the deck for the brain to relax and be creative for another day. OMG I sounded so boring just now. My books are very creative, I swear. Okay, now I sounded boring and defensive. Great.

I’m a member of the Toronto Romance Writers and Romance Divas, though ironically I don’t actually write romance at all. I frequent them because those ladies have the best marketing ideas, and they’re a very warm bunch. I’m also a member of Sisters In Crime, though I don’t actually write mystery. I write stuff with an element of mystery though, and the geek girl in me totally enjoys their forensic workshops.

I do. I have a master spreadsheet with like, ten tabs in it. But after I finish planning I hardly look at that file anymore, because whatever I don’t remember by heart isn’t worth forcing into the story. I trust my brain to plan, but I trust my instincts to carry the story through.

Lots of research on changelings and fairies. I can’t put a twist on a convention if I don’t know what that convention is.

Definitely. But I also read/watch outside of my genre. I’m like a vitamin-deficient person who takes in what her body doesn’t naturally produce, until it does. Here’s my little “reading cocktail”:

-Military sci-fi for the fight scenes

-Romance for the mushy stuff

-Thriller/mystery for the plot twists

A cold and desolate cabin in the Arctic with a laptop, tiny desk, Kraft Dinner and freeze-your-ass-off toilet seat. No Internet. No creature comforts. No distraction.

Then I finish the book and go to Bora Bora!

Louisa Lo lives in Toronto, Canada with her husband, an aristocratic cat, and more cardboard boxes than she cares to unpack. She decided to write about vigilantes, because it seems like a better life choice than trying to become one and landing herself in jail. She just has that kind of luck.