Our seventeenth awesome author in the countdown until the Get Down With The Awethors Facebook event on April 12 is D.M. Cain. She’s one of the authors who started this wonderful event and her writing is outstanding (first-hand knowledge!). Don’t miss her giveaways!

I’ve got 2 swag packs for A Chronicle of Chaos to give away, which will include a paperback copy of the book, a notebook, pen and pack of chocolates. I will also be offering sneak peeks of my upcoming book, The Shield of Soren, and giving some insight into the influences behind my books. I’ll be hosting the event all day so I’ll be around to chat with all the other authors, as well as being available to answer questions.

My most recent book is A Chronicle of Chaos – a YA epic fantasy, the first in a long series 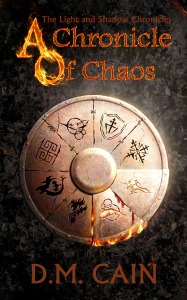 of 13 or more stories. You can find it here: http://www.amazon.com/Chronicle-Chaos-Light-Shadow-Chronicles-ebook/dp/B00NJ89B8M/

I am always inspired by music. I like to listen to large-scale orchestral music, which instantly paints vivid images in my mind. I love to get away from the stresses of being a teacher, author, wife and mother by delving into my own worlds and losing myself in my characters. It is so cathartic for me, even when I’m exhausted from a hard day’s work, and nothing relaxes me more than writing.

The Picture of Dorian Gray by Oscar Wilde. I think it’s the one book I’ve read that has literally everything I’ve ever wanted in a story. It is devilishly witty and funny, but at the same time dark and foreboding. It is the most quotable story I’ve ever read, but hits quite a powerful nerve by the end too. Wilde was an incredible writer.

I’ll be there for most of the event! For me, it will be 8 am–11 pm UK time (which is about 4 am–7 pm EDT). I might pop off to do other things every now and then, but rest assured I’ll be back. I wouldn’t want to miss much! 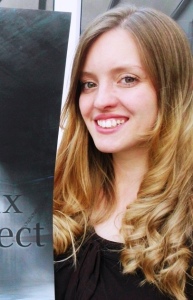 D.M. Cain has been writing since the age of thirteen, but her first full length novel was self-published in May 2014. The Phoenix Project is a psychological thriller set in a dystopian future.

Her second book, released in October 2014, was A Chronicle of Chaos – the first in a dark fantasy series. In February 2015, she began to work with U.S. publisher Booktrope.

She is currently working on the next novel in the series – ‘The Shield of Soren’ and a short story to accompany it.

In prisons across the country, inmates are forced to fight to the death in a weekly bloodbath while the nation cheers them on.

Raven Kennedy, a bitterly depressed young prisoner who has never forgiven himself for his unspeakable crime, struggles against his own guilt and self-loathing. But even as the real war wages within him, Raven is forced to battle some of the prison’s most ruthless killing machines. Can he survive long enough to unravel the anger and regret that shackle him—and one day find the forgiveness he seeks?

“The Phoenix Project by D.M. Cain is a superbly written debut, soaked in tension and intrigue.” Jack Croxall, author of the Tethers trilogy.

A Chronicle of Chaos: http://www.amazon.com/Chronicle-Chaos-Light-Shadow-Chronicles-ebook/dp/B00NJ89B8M/

A Chronicle of Chaos blurb:

In the deepest bowels of Hell, five demons have been summoned, their bonds to the fires of damnation severed. For the first time in millennia, they have been called to the Human Realm to put an end to a battle that has raged for centuries.

The world is split in two – an immense and ancient battleground. The Children of Light and The Brotherhood of Shadow dominate the war-torn land, each yearning to rule the planet. Finally, The Brotherhood has summoned the demons, a weapon that could destroy their enemies once and for all, if they can only keep them under control.

Chaos, a soldier in The Children of Light, basks in the glory of being the highest-ranking fighter of his generation, but his arrogance and impulsiveness prevent him from being given the opportunity to prove himself. He believes himself beyond the law, superior, a god amongst his people, but a fateful coincidence puts him at the mercy of the demon, Anathema.

The two warriors, a demon and a human, strike up an intense rivalry, but their obsession to destroy one another only leads them closer together. They must decide which side they belong on before all existence is sucked into one final Armageddon.