Our eighteenth awesome author in the countdown until the Get Down With The Awethors Facebook event on April 12 is Rocky Rochford. Co-creator of this outstanding event, Rocky has several books, at all different lengths and on many subjects, available for purchase – and some to win!

For starters I’ve added a number of works for a free giveaway as part of a book bundle. I’ll be posting cover art, extracts and doing a general Q&A about anything and everything, as well as taking part in our Cover Wars contest.

The Spirit of Iris is the title of released work, the first installment of the Rise of the Elohim novels (Elohim being the Jewish word for Watchers, Guardians), to which I have a series of four full-length books currently planned.

As a child, I was always most interested in fantasy, first captivated by a series of dreams I used to have about a warrior by the name of Jacka-riah Jackal, whose sole duty was to defend an ancient kingdom and its empress ruler from hoards of monsters and beasts. Then my brother got a Nintendo 64 and I played Ocarina of Time for the first time. Ever since my first quest with Link, I’ve been a huge fan of the Legend of Zelda series, and I played Final Fantasy X a couple of years later, which for me just sealed the deal. Ever since playing this game, I wanted to write something on the type of scale the stories of those video games projected, so this was where the idea first started gathering momentum. Also because of that, with a deep love of Zelda, which led to me working on a number of Zelda parodies, I took to doing my own fantasy story, one that would see a young male protagonist take charge in a bid to free his home world from an ancient evil.

As for where can you find it, it is available on:

I write purely for the sake of writing, and sleep. I have so much going on in my head that I find it really hard to just switch off, so many fantasies and the like, so writing is a great way to get it all out, make some space and share my deranged musings with all those who are crazed enough to delve into them.

Oooh tough one, but if I had to pick one, Bram Stoker’s Dracula was the one book I just had to read. I enjoyed it so much more than the film.

I’ll most likely be on most of the day, as much as I possibly can, to help keep the whole thing moving. 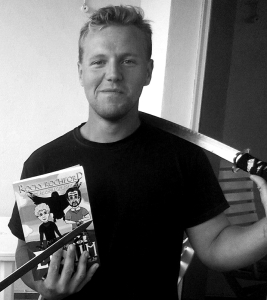 My name is Rocky Rochford and I am a scuba diving, photo taking, adventure seeking, sword collecting writer and marine conservationist. I’m a handful of years into my twenties, but after living life on the road, going town to town before finally settling down, I’ve gained great insight into the world and her workings. From day one I have been a writer and a writer I shall forever remain.

I like to consider myself to be a student of everything and yet a master of nothing, who does not choose what he writes, but writes what chooses him, be it fantasy, crime, poetry, philosophy or even adventure. After all, life is a journey we all get to experience, just like a good book.

Every read of one of my typed works is another trip into the imagination of my mixed up, crazed and deranged mind. Welcome to the World of Rochford.

Feel free to get connected with me on any of the following site locations: