Our thirteenth awesome author in the countdown until the Get Down With The Awethors Facebook event on April 12 is Tory Gates, otherwise known as DJ Riff. Tory writes literary fiction that deals with relevant cultural issues in a readable way, and his upcoming book will be YA/Mainstream.

A free copy of my first book, Parasite Girls; the cover is also entered in the Cover Wars competition.

Parasite Girls is available through Amazon.com, either in physical or Kindle form. E- 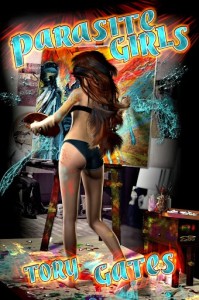 readers of other kinds may also purchase the book through Smashwords.

I am currently in the editing process for my next work, A Moment in the Sun, a Young Adult/Mainstream crossover story that will be released later this year by Sunbury Press.

There are so many different forces that have inspired me over the years. Music is indeed one of these; as a broadcaster I was exposed to so much over the years, it’s hard to not be inspired in another creative direction.

Writing was another expression beyond what I did for a living. I also found it became a great form of therapy. I was unable at first to write about myself, but I found I could write about other people’s experiences. Then I gradually began to chip away at the things inside me, which were even better, as I lived them.

That’s a tie: The Hobbit and the Lord of the Rings trilogy. I read the former for the first time when I was nine, and LOTR at ten (so I read them long before they were cool!). Tolken’s creation of Middle Earth (which spanned over 20 years) is a journey of imagination that I’ve never encountered before or since, and I don’t think we ever will. It proved to me from an early age there were no boundaries for creativity and storytelling.

I will be on for the midday hours, hopefully. As I have promoted the event on this, I’ll shamelessly plug: I host a Sunday afternoon program called The Music Club on Radio-Airwaves Station from 4-6 pm Eastern, at www.radio-airwaves.co.uk – perhaps I can provide some music of interest for you during that time! 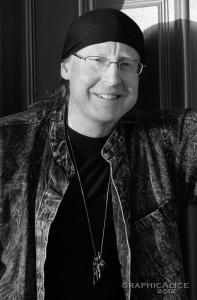 Tory Gates is a broadcast professional with over 30 years of radio experience. He has worked nearly every format as a DJ, news anchor, journalist, talk show host and producer. Tory is currently a reporter with the GeoTraffic Network, plus a sports anchor for the Radio Pennsylvania Network. He is also known on the Internet as “DJ Riff,” host of the The Music Club for the London-based Radio-Airwaves Station.

His second book, A Moment in the Sun, a Young Adult/Mainstream work will be released this year on Sunbury Press. Parasite Girls, Tory’s debut novel, was released in 2013 and is available through Amazon.com and Smashwords.

Tory is also a songwriter/musician with the indie folk duo the Dharma Fools, and an actor with experience in stage and independent film. Occasional thoughts and observations can be found on his blog, Words of a Pre-Curmudgeonly Zen Pagan.

A native of Vermont, Tory lives in York, Pennsylvania with his five cats and the herd of deer that come to sleep on his lawn each evening.