Olivia Greer is counting the days until her date with Michael Bellemare, when her sister, 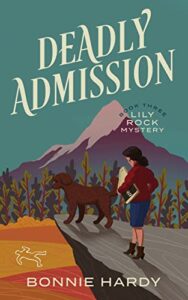 Sage, calls in a panic. As the principal of Lily Rock Music Academy, she meticulously planned the parent orientation weekend.

Then, an academic tutor is found dead.

While Officer Janis Jets investigates the case, Olivia is called in to coach the weekend headliners, the Tone Rangers and go undercover for the constabulary. With Michael, and her lovable labradoodle by her side, Olivia discovers clues that leave her questioning everyone from the faculty to the local law enforcement.

As accusations fly and rumors circle, can the trio expose the truth before the curtain rises? Or will someone see to it that the Tone Rangers final bow will be their last?